I've been getting a lot of email lately from people sending me this stupid 9/11 conspiracy video called "Loose Change." I've tried to ignore it for months now, but you morons keep forwarding it to me, and I keep having to add more email addresses to my spam filter. The ironic part is that I'm a huge conspiracy nut, and even I can't stomach this bullshit. For example, I believe that there is a small, reptile-like creature called Chupacabra that sucks the blood of goats in Mexico. Area 51? Hell yes. Roswell? Pass me the Kool-Aid. But "Loose Change" elevates bullshit to an artform. Watching this video is like being bukakked with stupid.

Unlike others who debunk 9/11 conspiracy theories, or "cons" for short, I'm not going to bother with going through intricate point-by-point rebuttals, or pointing out the hundreds of factual inaccuracies and outright lies in this "documentary," because I don't need to. In fact, I can debunk the entire story with one simple observation:

The fact that this man is alive... 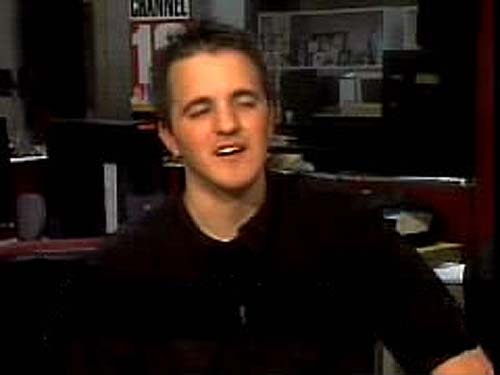 ...is proof that "Loose Change" is bullshit.

1. The man in the picture above is Dylan Avery. To be more precise, the fact that Dylan, his friends, and family are alive, is proof that "Loose Change" is bullshit. He, along with a couple of his friends, created a 9/11 conspiracy video claiming that the US government and the military caused 9/11. Take a closer look at the last part of that last sentence: he's claiming that the US government, for whatever ends, killed nearly 3,000 innocent Americans, and tens if not hundreds of thousands of more lives in the conflicts that ensued because of it.

Whatever reason it may be that the government supposedly orchestrated this conspiracy, it must have been worth it to them to cause so much suffering and loss of life. So if there's any truth to this, then you can bet your ass that the government wouldn't let a couple of pecker-neck chumps with a couple of Macs and too much time on their hands jeopardise their entire operation by letting this stupid video float around on the Internet. I can picture you morons emailing me now: "BUT MADOX, MAYBE DYLAN POSTED IT ON THE INTERNET BEFORE THE GOVERNMENT HAD A CHANCE TO REMOVE IT LOL." Yeah, too bad this rebuttal is inconsistent with the premise of Dylan's shit-festival of a movie: that the WTC was brought down "in a carefully planned and controlled demolition ... and it was pulled off with military precision." Now we're expected to believe that the same government that was able to commit the largest terrorist operation in history--with military precision no less--is suddenly too incompetent to sniff out and shut down a little website set up by some college losers within days, if not minutes of its creation? The US government has the capability to monitor every electronic communication made anywhere in the world, yet we're expected to believe that they wouldn't be able to nix this kid long before his video ever became popular?

I win. There is no conspiracy. Eat my shit, losers.

The other type of 9/11 conspiracy email you dipshits keep sending is the $20 dollar WTC conspiracy. Glenn Beck--a loud-mouthed, fat-faced asshole on CNN--has a copy of it on his website:

What are the odds that a simple geometric folding of a $20 bill with elements of design that were conceived in 1928 by a committee of treasurers, a full 42 years before the World Trade Center even existed, could accidentally contain a representation of both terror attacks? Pretty good, apparently.

The article on Beck's page goes on to ask: Need even more proof? No, you cock! You had me at "the U.S. $20 dollar bill contains hidden pictures of the World Trade Center." As if a folded picture of shrubbery on a bill that kind of looks like smoke wasn't convincing enough of a conspiracy, Beck offers this gem on his site to sway those few remaining skeptics:

The question mark at the end of "COINCIDENCE" is clearly there to denote a rhetorical question, as clearly, this is not a coincidence. To help out Glenn Beck, I sat down with a $100 bill and tried to find any hidden messages the bill might contain. Here's one that he hasn't found yet:

Fold the bill so that the "ON" of "ONE" is covered:

Another fold covering part of "DOLLARS:"

Finally make one last fold, and with a magic marker, add the following letters to reveal a hidden message!

For anyone interested in a point-by-point debunking of some of the most popular conspiracy theories out there (like the fact that steel melts at 1525° C, and although jet fuel burns only at 825° C, it doesn't have to burn hot enough to melt to cause the buildings to collapse, since steel loses 50% of its strength at 648 ° C), check out the following links: