i think im in love with donald rumsfeld. i know what ur thinking but he is true american hero. he really inspires me to become a better person. 4 example the other day i saw a black person walking down the street and i was like "omg a negro" but instead of walking on the other side i said "what would rumsfeld do?" so i stayed on the sidewalk. when he came up to me i wanted to show him that i have no problems with people of color so i said "hey" and offered him my spare change before he could even ask. he was so happy that he told me to keep it. there was nothing to worry about after all! so i asked him if he wanted to play jazz at my birthday party, but he said he didnt play jazz. i think he was being shy lol! 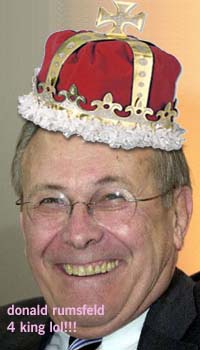 i think rumsfeld should be king because hes a real patriot. just the other day i saw him testifying on the 9/11 commission and some guy asked him about y he didnt stop the plane attacks and he was like "i dnot know, f you fags" lol.

read more of my opinions!!!