There's nothing worse than an aging hippie. 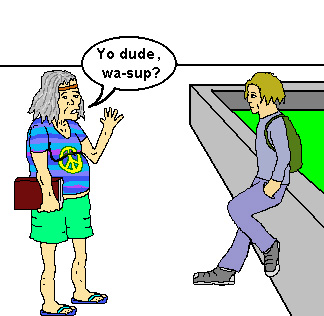 Hippies blow. There has been a recent increase in hippies at my university. They're old, wrinkly, disgusting and above all, worthless. What right do they have coming back to school after they spent their youth doing drugs and having sex? They frittered their lives away while everyone else busted their ass to get through school and 40 years later, they want to come back and get a degree? Screw you.

I have no sympathy for hippies. I'm tired of going to class and having some 47 year old moron sit there and ask stupid questions. It's bad enough that they're even going back to school, but some of them have the audacity to act young. There's this one lady that I see all the time around campus, and I can't even begin to describe how gross she is. There aren't enough synonyms in the english language for the word "disgusting" to adequately describe her. She's at least 50 years old, has short gray hair, flabby arms, a big gut, and a face that paradoxically has more wrinkles than skin pores. Here's the worst part: she wears spandex. Nothing but spandex. People, if you don't have the body for it, DON'T WEAR SPANDEX. Hell, even if you do have the body for it, don't wear spandex. Some lumps just weren't meant to be seen.

Every time I see this lady, I collapse and go into convulsions as I try to fight back the vomit. On top of it all, she wears really short shorts. These shorts are too short to even pass as underwear. Holy shit it's so gross. Not only that, but it looks like she's wearing depends underneath. BARF. I just puked all over my keyboard. It's time to kick some hippy ass.

459,887 hippies are trying desperately to hang on to their youth.