What do the following animals have in common? 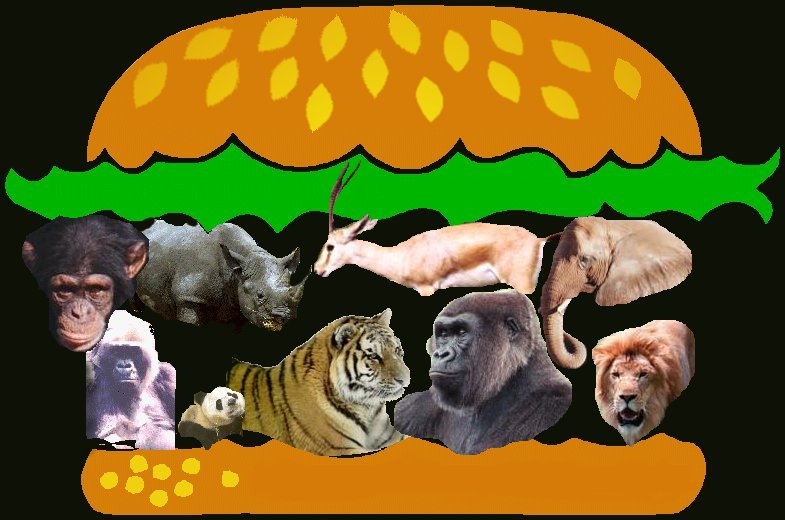 Animals are made to be eaten.

I'm tired of hearing all these bleeding heart nancy-boys crying about animal rights. They should be eaten along with the animals they so cherish. Those stupid jerks at Disney keep making those damned cartoons about wimpy ducks and fish that talk so kids these days don't go to Zoos expecting to see a hairy, red, baboon's ass, but a cute and cuddly Simba or Rafiki (Disney's The Lion King atrocity).

Animals don't have rights. They don't have rights, because people like me don't give them any. If a Bear in the woods feels like you violated its territory, tough shit, blow its head off. You have the "right" to be in a Bear's territory just as much as he does. I don't subscribe to that "he's just as afraid of you as you are of him" bullshit either. If the Bear was afraid of you, it would probably run away from you, rather than try to attack.. Unless the Bear is stupid, which he is.

I was driving to school the other day, when I came across a dog in the street. I must have been 30 yards away when I saw it, but the dog didn't move. When I came within 10 feet of the dog, I had to stop the car so the stupid animal would get out of the way, and not until after I considered getting out of my car to kick it. The dog was clearly stupid, and would have probably been killed by another driver. Why is it so stupid? Why should people go out of their way to preserve animals?

Where do you draw the line between what deserves to be saved and what doesn't? Do trees deserve to be saved? Do plants deserve to be saved? What about insects? If so, even Mosquitos? Rocks that get destroyed at a construction site? Yes, everything should be saved. I have an idea. We should all sit down on the least impressionable piece of land we can find and try not to kill anything or to hurt anyone's feelings and eat only tofu and sing happy songs about dancing fairies and flowers and children and smiles and laughter. We should be so happy that it hurts. We should live in harmony with the animals and we should spend hours hugging old people and riding the "It's a Small World" ride at Disney Land, and we should protest against people that wear fur, because wearing fur is mean.

We should all sport those wonderful "Mean People Suck" stickers on the back of our cars.. oh wait, cars are mean, I meant to say bikes made of 100% recyclable eco-friendly materials that don't harm anything. Then everything will be great. Is that what you tree huggers want? Then will you stop your incessant bitching? Well it's NEVER going to happen. People are going to eat meat, animals are going to die, and there's really nothing you can do about it except bitch until someone gets sick of you bitching and runs you over..

Animals have made people happy, animals have infatuated some people's imaginations, and even motivated others. Animals have even saved lives. So what? I'm still going to eat meat. I'm going to eat meat until I die. And when I die, I hope someone eats me too. If animals weren't so damn stupid, maybe I'd care. But until then, I'm going to look forward to eating if I'm going to be eating dead animal. If anything, people shouldn't eat plants. Plants are what keep us animals alive, yet people eat plants. Plants are so important, that without the direct aid of plants, we cannot live. But is this of any concern to the eco-friendly idiot? No. He just wants something to bitch about because there isn't a war.

There's over a billion cows in India releasing the largest supply of methane into the atmosphere, and devouring tons of feed each day, yet the animal rights activists don't seem to be bitching about that. No, they have much bigger fish to fry, like sailors trying to make a living by catching fish to feed their families with. I don't know what I'm talking about. Bottom line: Eat Meat, use the Earth and everything on it for what it's worth, Disney blows ass, bears are stupid, and I'm tired.