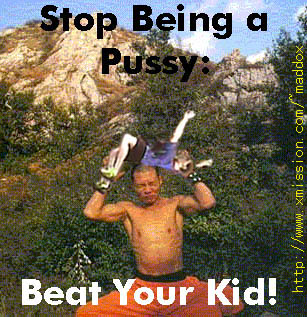 How come everyone today is too much of a pussy to smack their kids around? That's what I want to know: why are parents afraid to beat their kids? When I was a kid and I screwed up, my parents beat my ass. We didn't have a conversation about it. I didn't have a "time out." In fact, I've never even once been grounded in my life. What's the point? Send your kid to his room and make him play video games and read comic books all day? Great idea, why don't you take him to a psychiatrist while you're at it so she can pull some disorder out of her ass to hide the fact that you're a bad parent?

Kids today need a good beating every now and then. If you don't beat your kids when they fall out of line, the next thing you know your son will go off and bang some dude in the ass just out of spite. You tell them to clean their room, they say "no," you smack them. It's simple; it works. Don't listen to these assholes on TV with their bullshit hippy psycho babble; if they had it their way, every child would be raised in a pastel colored room with Philip Glass pumped through the speakers 24 hours a day. Then again, it might not be all that bad because it will make your kids complacent, so it won't be as hard for them to swallow when they realize that they'll be spending the rest of their lives chained to a desk in a cubicle writing reports to make someone else rich.

The problem is that kids today think their opinions matter. By not beating your kids, they get a skewed perspective of reality where they start thinking that they have it rough and that they can get away with dying their hair and listening to Insane Clown Posse. That's where you need to come in and put the law down. To help you, the negligent parent, I've put together a guide to smacking your kids for your convenience (hint: you may want to even print this guide up and hang it on your fridge as a reminder to both you and your kids). Here are some useful techniques:

Five across the eyes. This is a very basic maneuver and usually enough to cover most situations when your child is out of line. Simply put four fingers tightly together and either leave the thumb off to the side or fold it behind the other four fingers. Then smack your kid across the face with the back of your hand. Now this is the tricky part: make sure to snap your wrist just before contact otherwise you won't get a stinging effect. Very important because you don't want to risk letting your kid think you're a pussy. The sucker punch. Just ask the question "hey, what's that on your shirt?" and when they look down, bust their lip. You need to do this every now and then to keep them guessing. Don't ever let them off the hook. Just because they're not doing anything wrong doesn't mean that they didn't do something wrong earlier that you weren't aware of. The yard stick. Or for those of you who don't use the arbitrary American system, this is also known as "the meter stick." This is a good general purpose beating because the stick usually doesn't last beyond three or four good whacks--usually enough to send the message. The one-two shut-the-hell-up. This is priceless when you're shopping and your kid won't shut the hell up: "I'm hungry, I want toys, I need my Insulin..." etc. First smack your kid (the 5 across the eyes technique works). Wait a few seconds for your kid to start crying, then smack your kid again to let him know that you mean business. This usually shuts them up because they see that the amount of crying is proportional to the amount of beatings. The 2 x 4 / PVC pipe. If you do your job as a parent, this should never have to be administered. This is for heavy duty jobs only (ie. any time your kid comes home and begins a sentence with "she might be pregnant..." or "I can _____ if I want to..." where the blank can be any of the following: smoke, have sex, experiment with drugs, watch Oprah, etc). Usually the threat of this beating is enough to keep your kid from screwing up. 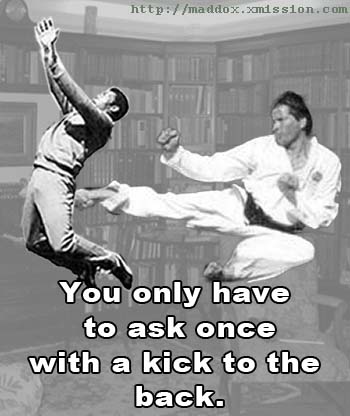 The Dragon Kick. If you're interested in a permanent solution to your child giving you lip about washing the dishes, cleaning his or her room or filing your tax return, then the Dragon kick might be the technique for you. I guarantee that you will only have to ask once after the Dragon kick has been administered. The skull thump. A quick blow usually dealt to the side or back of the head. Simply flick them in the head with your finger. An alternative is to smack your child up side the head with your palm. Very useful for teaching your child to read when he or she makes a mistake. Hitting your child when he or she is learning builds confidence, or undermines confidence--I can't remember which. The one-handed chauffeur reach around. A quick reach around while you're driving to smack your kid and his friends too if they disrespect. Swerve the car back and forth for the full effect. The cane intercept. If you're too old to chase your kid around the house, use the handle of your cane to trip him if he tries to get away. When he gets up, poke him in the head a few times to let him know who's boss.

There you have it. Use these basic techniques to discipline your child if you want him or her to turn out to be a success story like me. Here's how to tell if you've fulfilled your obligations as a parent: 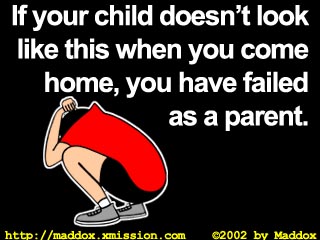 Remember: never take shit from your kids. You make payments on the house, utilities, their clothes, school, and their food. You own them. If they don't like it, they can move out. If you love your kids, love them enough to beat them so that they don't grow up to be idiots.

3,090,004 people don't know the difference between discipline and child abuse.