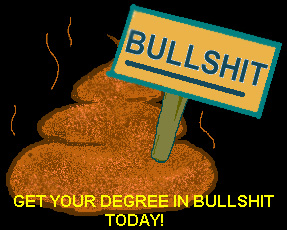 Are you an executive? Do people follow you around and kiss your ass all day long? If so, then chances are that you're pretty good at bullshitting. Bullshitting is the act of putting on the appearance that you know what you're talking about. I do it, you do it, everyone does it. Executives just happen to do it very well.

Everyone at one point in their lives will work for an asshole. It's inevitable. Where do they come from? These sages of bullshit, weilding uncanny powers to deceive and exaggerate? From college of course!

Throughout grade school you may have noticed several distinct categories of people. There are always head-up-their-ass jocks, slutty cheer leaders, nerds, and drop outs. After high school, the jocks realize that they're completely worthless and decide to go to college to justify their existence. Once in college, they take all the bullshit classes like philosophy, english, accounting, and anything business related. Three years into college, they decide to get a business major, and graduate to become a manager somewhere. Rather than taking any classes in school that require more than a pulse to graduate, they take the easy route and get a BS degree in business (bullshit).

All the asshole jocks that gave you a hard time in school end up being your boss at work! To add insult to injury, they get paid ludicrous amounts of money to pretend to know what they're doing! They'll sit around with their thumbs up their asses in their huge offices, and give you absurd requests to accomplish the impossible, taking all the credit for it if it's good, and they'll still have the gall to bitch about it if it's not. They'll pick on you to feel better about themselves and they'll go home early every day. Every potential holiday is milked for all it's worth, giving them an excuse not to come in. All the while they preach bullshit about integrity in the work place and professionalism-- usually after going to a strip club for lunch.

When it comes down to results, they can bullshit like no other. Using obscure business jargon to make themselves sound intelligent during meetings. If you should catch them in one of their complex fabricated contradictions, they'll either call it a policy or deny it all together. Cowards. All of them. It's ironic how little any of them know about anything. If put into any other real-world scenario, they would die instantly. They have no skills, no natural talents. Nothing. Only the ability to bullshit and kiss ass... and sometimes that's all they need.

It truly doesn't matter what you're capable of, but who your friends are at work. How much work you do is inversely proportional to how big your salary is. The next time you're stuck at work in a stuffy office, forced to listen to some asshole rattle off meaningless bullshit, ask them this question: "WHAT THE HELL ARE YOU TALKING ABOUT?" Bulge your eyes and stand up for the best effect.

The room will grow quiet and everyone will look at him. He'll be directly put on the spot. He won't have anything to say. Then ask the people in the room "Does anyone really know what the hell's going on? All you people ever do is babble about meaningless bullshit and nothing ever gets done. You can't justify anything you've said, ever, and I'm not going to take this anymore." Then say "You're all full of shit. Admit it." Gradually, they'll all admit that their entire career is a sham and that they are completely worthless. Just once I'd like to hold up a sign during a meeting that says in big black letters "YOU'RE FULL OF SHIT. SIT DOWN." I can't believe how easily these bastards get away with it.. none of them know what they're talking about. NOBODY DOES. Worthless.