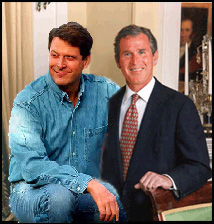 Bush and Gore: too friendly?

Once again, people have to make a choice. This time between George W. Bush and Al Gore. I say "Why vote for either of these assholes?" I always see those stickers on people's cars that say "if you don't vote, don't bitch." What difference does it make? I voted for that nut Ross the boss Perot last time, and my vote didn't make a difference. In fact, when I went to turn in my vote they opened it up, checked to see if it was Perot, and promptly threw it away and kicked me out when they saw that it was. Bastards.

I don't like Bush and I don't like Gore. They're both a couple of phony assholes that will say or do anything to get votes. I think the strongest message people can send to politicians running for office is to not vote. If you don't like the message either of these puds are sending, then don't vote for them. Vote for the lesser guy. Vote for a quaker or something. Hell, vote for me. Let's see if I can't get into office by write-in votes. I'd kick some ass as president.

Bush and Gore are sleeping together anyway. If you vote for one, you get the other. Two times the shitty leadership for the price of one. I've seen the way they play grab ass on the news--couple of goofy bastards. Republicans blow and democrats blow. Don't vote for them.