I Hate Buzzfeed.
Nothing makes me go from happy and optimistic to destitute and angry as quickly as seeing a BuzzFeed link. Between the stolen images, vapid content, lame jokes, recycled memes and desperate assimilation of all things pop culture, I feel like I'm dealing with a cultural hydra. Only what BuzzFeed accosts you with is worse than poisonous breath and virulent blood; BuzzFeed attacks our collective intellect, worsens civilization and collects a handsome reward for doing it. It's hard to start an article about the many facets of shitty content that is Buzzfeed, so I'll start with this video: In the video, there was a brief screenshot of a BuzzFeed article titled, "37 Ways To Know You're A 2000's Kid," with stolen images used under the guise of "fair use." According to U.S. Copyright Act, "criticism, comment, news reporting, teaching, scholarship or research" is a valid application of the doctrine. Not using images as decoration to help dress up a post. Here are a few of the images used under the guise of "fair use:" 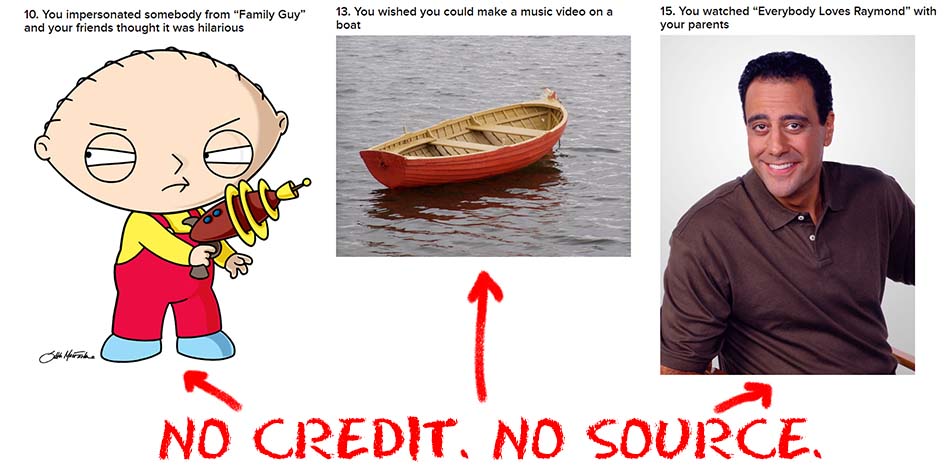 "Source:" http://www.buzzfeed.com/daves4/37-ways-to-know-youre-a-2000s-kid
So how do the images above qualify? The "author," Dave Stopera, isn't saying anything about these images. For example, the caption for number 15 above says, "You watched 'Everybody Loves Raymond' with your parents." He's not saying anything specifically about Brad Garrett or his character Robert Barone, so is it necessary to include this image in the article? If so, why him? He's not even the main character of the show. And why specifically this image of him? Does someone who's not already familiar with Everybody Loves Raymond learn anything by seeing this image? Is there any reason to believe that this is a typical character from the show? Or that he's even from the show? In fact, someone who hasn't seen the show could just as easily conclude that this is a picture of one of the author's parents. We'll never know, because BuzzFeed's lazy staff writer was too much of a dipshit to source this image, or comment on it in any meaningful way. But wait, there's less! If you thought the stolen images on this article were bad, that's just the tip of this shitty iceberg, because THE ENTIRE ARTICLE IS STOLEN:

Clicking on the link to the "source" leads to a website that no longer exists. So not only did Stopera not source any of the images or make the minimum amount of effort to justify their use, he plagiarized the entire article. So in the off chance that a drooling BuzzFeed reader actually decided to see who wrote this article, they can't because the link is broken and Stopera didn't bother including the author's name (assuming the author's name isn't "Someone"). So I did some digging and found a cached copy of the defunct website on archive.org that pointed to an old banner printing company. This seemed like a strange thing for a flag and banner company to post, so I dug around and found that the flag and banner site had hired an SEO company to post a bunch of "viral" bullshit on their site to improve their traffic ranking. Then I did some more digging around and found what I believe to be the earliest version of this article from a Yahoo Answers thread from 2010 by a user named Jimmy H:

It's hard to tell whether or not this is the actual source, but it's plausible because it was posted in 2010, and the article references songs and movies that came out in 2009 ("Up!" was released in May of 2009, for example). Misattribution: BuzzFeed's Modus Obfuscation When BuzzFeed writers deign to link to sources, they often misattribute the content and link to the first place they found it, rather than the origin. That'd be like overhearing someone on a bus say, "Houston, we have a problem."
-Some guy on a bus "Houston, we have a problem," and attributing it to him. The "sources" BuzzFeed link to are often tumblr sites that point to other tumblr sites, that point to Pinterest, Instagram, Flickr, Imgur, Reddit, and countless broken links and sites that aren't the actual source of the images they've misappropriated. For example, in a post titled, "33 Dogs That Cannot Even Handle It Right Now," there's an animated GIF that BuzzFeed attributes to tumblr, which it then attributes to YouTube: 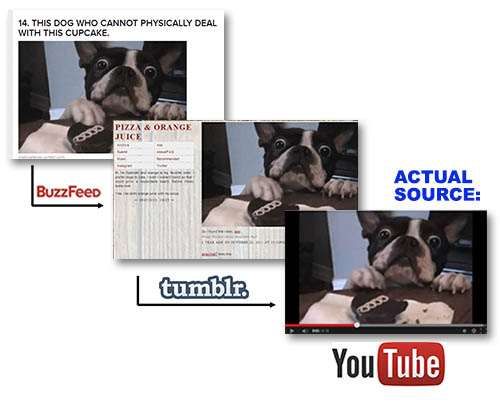 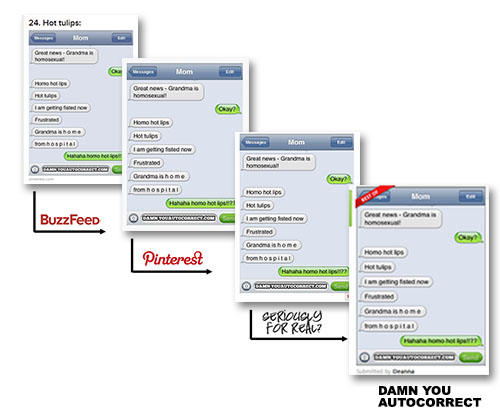 Similarly, the image above on the right was attributed to Pinterest, which was then attributed to a site called "Seriously For Real," but the actual source of the image is a site called, "Damn You Autocorrect." What's interesting about this image in particular is that it HAS THE ACTUAL SOURCE ON THE IMAGE ITSELF. Yes, BuzzFeed writers are so lazy that expending the minimal amount of energy it takes to rotate their eyeballs to the bottom of a small JPG to make note of the watermark is too taxing for them. There are calves raised for veal that expend more energy than the average BuzzFeed writer : 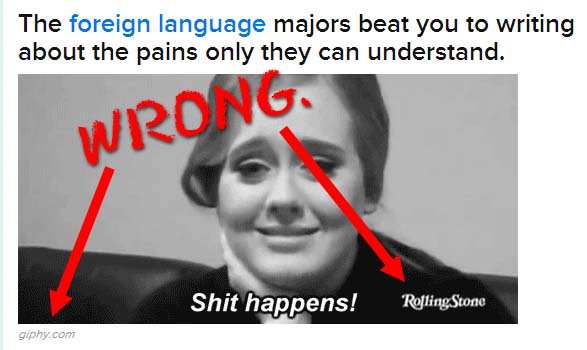 From: "Things Only People Who Shared Your College Major Will Understand"
Also, do you shit heads think you could make that link any lighter? I can still see it. Perhaps the only source of ingenuity on BuzzFeed are the new and innovative ways they keep finding to make it as difficult as possible for people to click on the source links, so they don't divert readers to source websites. You know, the people who created the content they stole?

BuzzFeed proudly displays the "Made in NY" mark on their website, as if they're some kind of purveyor of fine hand-crafted, artisanal beer. BuzzFeed's servers are in California, they have contributors from every state in the US, offices in London, Australia and Los Angeles, and their content is stolen from people all around the world. Even BuzzFeed's founder, Jonah Peretti, grew up in Oakland, California, graduated in Santa Cruz, and did his postgrad at MIT. What exactly are they "making" in New York? Shitty list articles and worn-out meme jokes aren't a "thing"—or at least, anything to be proud of. We're not talking about a small family-owned cobbler shop here, we're talking about a notorious content aggregator. The average listicle on the site has less than a paragraph of text. For example, one of the 10 most popular posts on the entire site, with over 9 million views, has only the following text:


BuzzFeed receives contributions from countless idiots who parrot their lazy writing style, so you could argue that the reason the quality of the posts are so low is because the contributors aren't staff writers. But the majority of the sloppy examples I've used on this page are, and the ones that aren't have been vetted and chosen by the staff (despite claims to the contrary on the website). Not that there's any excuse that would matter, because:
BuzzFeed has received over $46 million in funding.1

When I liken BuzzFeed to a cancer on the Internet, it's not just hyperbole. A cancer spreads throughout an organism, taking over healthy cells and displacing them with something unhealthy, which doesn't serve the body's purpose anymore. The site isn't just a blight on the web, it's actually changing the fabric of the Internet. Facebook, Twitter, Google+ and most other social networks have become little more than repositories for links to list articles. The net effect has caused a shift in expectation for the average Internet reader, away from thoughtful, purpose-driven content that informs, to cheap, superfluous filler that distracts. Ironically, the success of BuzzFeed's formula may be their own undoing. Because their listicles are so easy to produce and replicate (they literally encourage anyone to contribute), it has caused countless imitators to pop up. Garbage in, garbage out. If you don't spend much time, energy or ingenuity into making something, what you make will eventually become indistinguishable from your imitators. BuzzFeed is the king of the turd stack today, but they won't be tomorrow because they're built on a teetering pile of sticks, cat jokes and bullshit. The end is in sight. There are thousands of imitators out there, and more growing every day. What you produce isn't art. It's intellectual fast-food. BuzzFeed makes minds fat. TL;DR. Fuck you, read it. Tweet
737,539 people skimmed this article looking for numbers and bullet points to avoid having to consider one continuous line of reasoning.
Available now!
Join the mailing list here
Back to how much I rule... • New Book • Store • Email • Patreon •