You're not Dave Chappelle, and you're not funny.

You know what's funny? When people take catch phrases from funny movies, television shows, and comedians, then they repeat them in their best impression, regardless of their awkward accent, gender or lack of comedic timing. I can't get enough of it. My favorite example of this comes from a skit on "Chappelle's Show," in which Dave Chappelle does a parody bio of 80's pop singer Rick James.

The popular phrase from this skit is when Chappelle says "I'm Rick James, bitch!" Now everyone from fat Everquest nerds (yes I know I'm being redundant by calling an Everquest nerd "fat," don't email me) to pimply faced high school kids around the world repeat this phrase every chance they get, giggling spastically every time one of them says it in their crackling pre-pubescent voice. The source of this phenomenon: 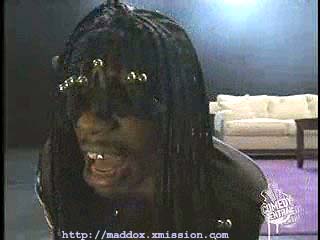 I don't know how, but every time someone does their impression of Dave Chappelle saying "I'm Rick James, bitch," it keeps getting funnier and funnier. Man, I never get tired of hearing people repeat their favorite lines from Chappelle's show. Of course, this begs the question: are these people paying homage to Chappelle, or are they cheapening the phrase, making it tired and unfunny? I did some research to find out what qualification these fans had, and posted my findings in the following graph:

The results were surprising: the graph above suggests that 6,367,619,884 out of every 6,367,619,885 people in the world are not Dave Chappelle, and therefore should shut the hell up. This finding was in contrast to what I thought initially; that these fans were in fact qualified to use Dave's catch phrase, otherwise why would they parrot on endlessly like idiots desperate to make their peers laugh at the expense of permanently ruining an otherwise funny joke?

Look assholes, it's funny when Dave Chappelle says it, not you. I'm tired of people adopting speech patterns, catch phrases, and their entire personalities from movies. When Jim Carrey's "Ace Ventura" came out, every prick I know did their worst "allllrighty then" impression. You can still hear it echoed by smug school girls who try to compensate for their lack of personality and any semblance of wit by chanting this mantra so maybe you won't notice that they're lying whores. The worst is when some gabby bitch is the center of a party, and someone tells an awkward story, to which she'll pause a beat, roll her eyes, then say "oooooookayyyyy!" Then she thinks it's funny and she high fives all her snobby bitch friends who watch stupid shit like "Will & Grace" and "Average American Family deals with gay daughter," all while listening to whiny angst-filled "emo" bullshit and taking everything Carson Daly says as gospel. I hope you choke.