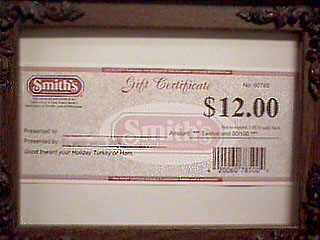 Apparently the tight asses where I work seem to think so, because this year they were gracious enough to give me Christmas bonus: a $12 gift certificate to a local grocery store, good towards the purchase of a holiday turkey or ham. Oh yeah, and the purchase is not to exceed five dollars in cash back. Holy shit, $12? Keep reading.

"Great," I thought to myself when I first received this bounty of joy, "It's twelve dollars more than I've ever received," and I threw the coupon in my room, never to be touched again (not only because I'm boycotting the grocery store it's for, but it's $12. What the hell am I going to do with $12?). You see, I've worked for the same company for 5 years, and this is the first Christmas I've ever received a bonus. So what? Well, it just so happens that this company also leased 10 new Jeep Cherokees for the executives, gave them Ski jackets, and rented suites and limousines for them, on top of hundreds of dollars they spent on wine and photographs of their excursion. We get $12 coupons in impersonal envelopes marked with the phrase "A gift for you." You know, nobody owes anyone a Christmas bonus or gift. I'd feel embarassed to give someone a $12 gift certificate. It's just cheap. Plain and simple.

Every day there are programmers in the department I work in that optimize programs that save the company hundreds of thousands of dollars every year. $12 is the gratitude they can afford to give us. I suppose it's to be expected from a company that can't afford to rent office space for their employees to work in. I work in a cubicle that's probably 5x5 ft. My cubicle is shared by two other people simultaneously. It's bad enough that we have to work in cramped cubicles, but to top it off, we have to share them. For the record, the computers that most of the employees work on are E-machines. Not only are the computers shitty E-machines (sporting a sleek Celeron 366 processor and 32 megs of ram, with a "random reboot" feature that causes the piece of shit to reboot randomly two or three times per hour), but we don't even have enough of these shitty computers to work on.

It's not like I work for a small company either. The company employs well over 2000 employees spanning over 17 centers, with 8 more on the way (not counting the hundreds of international branches). I suppose I should quit bitching since I can't expect more from a company that spends more on a few people in one night than I make in an entire year.