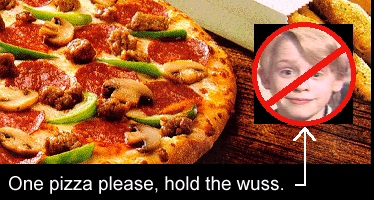 I hate everyone that likes plain cheese pizzas. Oooh.. don't like toppings on your pizza, sissy boy? You don't want onions on your pizza because you don't like the way they taste? If I ever have kids, they're NEVER going to eat plain cheese pizzas. Ever. My kids aren't going to grow up thinking they can pick and choose and be happy with what they eat, like all these other wuss kids.

A good example is the movie Home Alone. I hate Macaulay Culkin (the little jerk in the movie, I think he plays the part of Kevin). During the first part of the movie, his generous parents are ordering pizza, and they ask him what he wants on his order. He orders a cheese-only pizza. What kind of asshole orders only cheese on his pizza? Who does he think he is? Mr. Big Shot wants a cheese pizza.. pardon me your majesty, but is there anything else you'd like? A hotdog without ketchup, or some skim milk perhaps? How about nothing, you spoiled little brat? Does nothing sound good enough for you? Or are you going to bitch about it? That pale little shit. Laughing as he eats his cheese pizza. Laughing. Happy. Warm. But no.. it's not enough for him. He has to bitch and moan about having his pizza eaten by some other idiot.

Left with the option to eat some normal pizza (the kind with toppings other than pepperoni) and the option to cry about having his sick-ass pizza eaten, he picks the latter and gets sent to the attic like the spoiled little shit he is (and even the attic is too much. I'd throw the little shit outside in the cold until he learns his lesson. He might have to pay a fee and get his legs amputated to cross the bridge of hypothermia, guarded by my pal jack frost. give him hell frosty. good, I say. It'll build him some character. maybe then he'll lose his pale yellow hue, like he's sick all the time. oooh.. the sissy mary is sick. everyone drop what they're doing to help the sissy mary because he's dying. there's nothing I hate more, well.. i'm sure there's something, but I really hated those kids in school that had some disease, or life threatening excuse to skip school. Why? I never skipped school. Not one day. In high school, I skipped gym a few times because gym blew. But other than that, I'm clean. And what compensation do I get for going to school every time? A satisfactory citizenship grade. Satisfactory?! What the hell? I bust my ass everyday in school, do what I'm told, and I only get some bullshit "S" on my report card? To hell with them, I give me an "A" for "Actually trying to go to school everyday and doing my assignments to the best of my ability only to have that stupid whore Mrs Bitch-whose-name-rhymes-with-cunt give me an F on my buisiness procedures assignment, that stupid hag, I hope she dies". Mrs Gary was an evil bitch straight from the bowels of hell, more commonly known as disney land [see Celine Dione or Ellen Degeneris for more on origins in hell]. I hated Mrs Cunt, almost as much as I hated Mrs Dick, one of the upper echelon nazis in my school. I hated my high school. If it burned to the ground this very second, good. Bunch of damned jerks, they were to me. That's okay.. I didn't turn out to an asshole).