Update (10-11-04): Christopher Reeve passed away October 10, 2004 due to heart failure. The title to this article was inappropriate given this tragic event, so I changed it:

Christopher Reeve  is  was an asshole.

For those of you who don't know, Christopher Reeve is the guy who played "Superman" in all four coma-inducing movies during the 80's. Before I even get started about his injury, I'd like to point out that "the curse of Superman" is bullshit, and I'd love nothing more than to punch the guy who came up with it. Just like the E! True Hollywood Stories "curse of The Little Rascals," it's much publicized Hollywood trash. Half the time they try to pass off a tragic event due to a "curse," it turns out that the actors died at the age of 86. Yeah real tragic, dumbass. An actor got murdered or paralyzed after living a healthy youth? Excuse me while I shit myself in awe at the mysterious power of the curse.

In 1995 "the curse" struck Reeve as he was riding a horse called "Eastern Express." The horse was running around, trying to get the gangly asshole off of his back when he finally came to an abrupt stop before a jump, leaving Reeve's shit in ruins. Reeve became paralyzed from the neck down after the accident (more like conspiracy, another reason to add horse to the dinner menu). 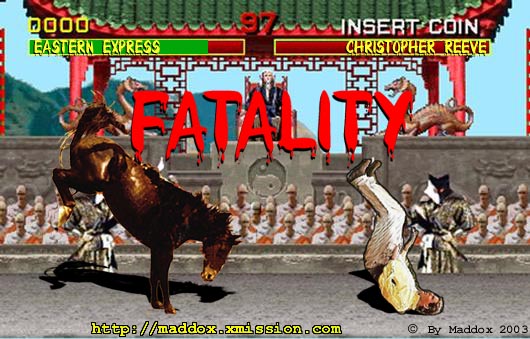 Why is Reeve an asshole?

Simple: because he's selfish. Reeve didn't give a shit about paralysis before his accident, but now that he's paralyzed, suddenly he opens up a paralysis foundation and cares about the plight of cripples? Where was his foundation in '95 when he played the role of a man with spinal cord injury? Sure, some of you might argue that he's doing a good thing by bringing attention to paralysis, but the underlying message being sent here is that nobody gives a shit about cripples until a celebrity becomes one.

What really pisses me off about Reeve is the sheer arrogance. Look up a Reeve biography and you'll find praise like "he has now found new meaning in life." Let me tell you something: any time you find new meaning in life because of a debilitating injury, your "old" life didn't have much meaning. Paralysis could strike anyone at any time, and if you're living your life in such a way that all your goals require the use of your arms and legs, then your life probably doesn't mean much to begin with. I'm sure people who were born paralyzed don't appreciate being told that their lives "have meaning too," as if they need affirmation from people who spend most of their lives working to pay off stupid bullshit like sports cars, expensive houses, and other junk that they don't need.

The "still living life to the fullest" doctrine pisses me off even more because you can almost hear a voice in your head that finishes off the sentence with "...as a cripple." What does it mean to "still live life to the fullest"? Why should it require any extra effort or energy, or the addition of the word "still" in front if you were living your life "to the fullest" to begin with? What can physical mobility afford you that pure thought can't alone? It's so gracious of Mr. Reeve to acknowledge that you can "still" live a meaningful life, even as a cripple. I'm sure that people who struggle with paralysis every day are exuberant at having someone champion their cause, it's just too bad that Reeve is in all likelihood doing it because he cares about himself first and foremost. Would he have opened up a paralysis foundation before the accident? Doubtful. Of course, we can never know for sure, but the fact remains that he didn't open up a foundation before the accident, and he poured his heart and soul into research afterwards, so the only conclusion that can be made is that he's doing it simply because he himself needs treatment.

The fact that he's helping thousands of people as he helps himself is a side effect of his cure; not necessarily his intention. I have little doubt that Mr. Reeve would work as hard to find a cure for paralysis if he was one of only a hand full of victims, so I don't think he deserves praise for this "good deed," because if it was intentional on his part to help these people, he probably would have had a paralysis foundation before the accident occurred.

I didn't have any beef with Reeve before his accident, but it's the praise he collects for his selfishness that makes him an asshole in my book. If tomorrow Reeve selflessly dedicated all of his time and effort--or even half of it--towards finding a cure for cancer or heart disease, he'd have my respect (not that he's trying to earn my respect, but having my respect is an awesome privilege). Hell, he'd earn my respect if he just cut the condescending bullshit for a few minutes, such as this prize quote "I've noticed that there are very few roles for people in chairs... I would like to see people with disabilities featured sympathetically." No shit? As opposed to all those other movies that show people with disabilities being demonized? Like it happens so often anyway. Why should people with disabilities be featured any more sympathetically than people without disabilities? If his goal is to live a normal life, how normal could his life be if all his future roles were "sympathetic"? Oh look, here comes the cripple, everyone act sympathetic regardless of the plot, because real life cripples never experience conflict or drama. If I were in a wheel chair, I'd want an ass kicking role where I would spend the entire movie running over people's fingers and tossing old ladies off of cliffs, not some suck-ass sissy role where I'd sit around and cry like a pussy.

Before you send me email bitching about me picking on cripples, ask yourself the following question: why is it any more acceptable to pick on non-cripples? Sounds like discrimination to me. If you're the type of person who would be offended by an article picking on Christopher Reeve without giving second thought to other celebrities I've picked on, chances are good that you're racist*.

*Note: I know that "race" doesn't have anything to do with being crippled. I'm just connecting the dots here people, quit emailing me.

A few choice emails I've received since Reeve's passing. Many people think I rushed to write this article after his death. Check again, dipshits.

From: kyle edwards
To: maddox@xmission.com
Subject: fuck you


fuck you.. he died today.. who is the asshole now.

From: Doug Kirk
To: maddox@xmission.com
Subject: you cunt


I'm an italian girl and I hate you.

From: dallas heard
To: maddox@xmission.com
Subject: you should burn in hell


you should fucking die for this you sick mother fucker. i will find
you and kill you you sick fucker for saying them things about a great
like Christopher Reeves


you probably are a bush supporter.  only a bush voter could write
such a dickhead article.

From: DIXON
To: maddox@xmission.com
Subject: Read your Christopher Reeve's site


You are probably right that Christopher Reeve would have not started
a foundation if he did not have his accident.  Instead of feeling
sorry for himself, he used his fame to help people with
disabilities.


So while he is now in heaven walking along with God, his foundation
and legacy will continue; and when you die (by the looks of it nobody
will care or notice), you can just go straight to hell where you
belong.


By the way, I'm not a racist or a bigot since I work with people with
mental and physical disabilities and I'm a black man married to a
white woman.  You seem like the kind of person who would vote for Bush.
You are nothing but a bitter, fucked-up waste of space.


You are possessed by the devil. Ask for forgiveness before you die or you
will live with the devil through eternity. Anyone who so believes in him
will have everlasting life. You need to improve yourself.

2,568,071 People didn't realize that Christopher Reeve was such a self-serving asshole before reading this article.