Two characters that were missing from the new Daredevil movie:

It almost pains me to do this because the Daredevil character kicks ass, but this movie is a turd; not a pile of shit like you might be thinking, but more along the lines of a two-flush corn log. One thing you should always be able to count on in a comic book movie is a bad guy who kicks ass. In this movie we get a character called "Bullseye." Guess what he has on his forehead? A bull's-eye. Guess what his special power is? He can throw darts and hit bull's-eyes. That's stupid. Why not have a character called "The Raging Hardon" where the character is a boner, or a heroine called "Salad Tosser" where she, um.. tosses salad. If you're going for stupid, why not go all out? This has seriously got to be the dumbest "bad guy" in a movie since the gimpy dude from Panic Room (that dog shit movie with the obnoxious bigender kid and her mom, played by Jodie Foster, where they spend the whole two-hour duration of the movie hiding from a limping cripple... ooh the suspense).

The main bad guy in the movie was Kingpin, played by Michael Clarke Duncan. Am I the only one who thinks this guy looks too friendly to be a bad guy? Every time he came near Daredevil in the movie, it looked like he was going to give him a sloppy kiss. These "minor" issues aside though, the movie mostly blows. They spent all of 3 minutes on Daredevil's background, 45 minutes on a stupid fight scene between Daredevil and some random chick who was introduced so abruptly that she might as well have landed in the scene with a parachute. Then there was a 20 minute bar scene where Daredevil fights another random guy who had nothing to do with the rest of the movie. Next thing you know Daredevil and the random chick were humping, some guy gets killed and then the movie ends. BORING.

What they really need to do is make a movie about the greatest comic book character of all time: Lobo. 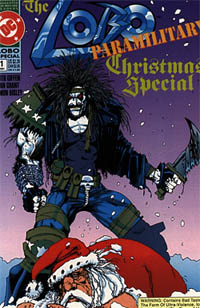 Not many people are familiar with Lobo because most people are lame and can't comprehend how much ass Lobo kicks. For example, the cover on the right depicts Lobo (also known as "the main man") kicking Santa's ass. Santa did something to piss Lobo off (or nothing, it makes no difference), and Lobo RUINED HIS SHIT. Lobo is a mean son of a bitch and doesn't take shit from anyone. If they made a movie about Lobo, it would start out with Lobo just sitting around looking at porn and minding his own business when some lame-ass comes by and starts nerding all over the place. Lobo takes his knife out and disembowels the guy while he's just standing there. The guy would start screaming because he's a pussy, then Lobo would reach down and rip the guy's lungs out. The rest of the movie would be mostly filled with Lobo wiping out villages of people, yelling at hospital patients and head-butting mimes. Lobo could kick any superhero's ass and it's high time he had his own movie. Lobo versus Daredevil? Oh yeah, so back to Daredevil. The movie is loosely pieced together, there are no transitions and the bad guys suck. Avoid unless you're a comic book movie fan, and even then, only if you're a fat comic book movie fan to be on the safe side.

846,368 people saw Daredevil and agree: Lobo could kick his ass.