Cancel the 2005 Academy Awards, the contest is over.

I'm going to save everyone a lot of time and money on the 77th Annual Academy Awards by just coming out and telling you what's going to win. No point in watching the show next year because one movie alone will dominate the Oscars in every category (except drama, because A. nobody watches drama and B. it's not a category): 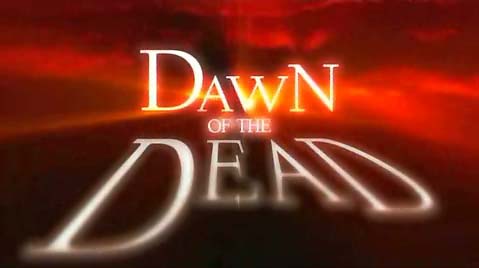 This movie stomps so much ass that they have to import colons from other countries to meet the demand. Just to be on the safe side, I went down my check list of ass-kickery to see where this movie stands. I challenge you to read all the way through this list without springing a rubbery one: 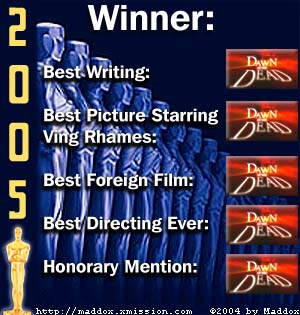 Holy shit! This movie almost has everything. The movie starts out with this chick (who is a 6 at the beginning, but by the end of the movie you're thinking she's an 8 because it's non-stop tit-sagging from fat zombie bitches from this point on) in a hospital, then she talks to her co-worker for what seems like hours and you think you're in the wrong movie because already there's way too much dialogue/plot building or whatever you call it. That's where the genius of the director comes in: he made it like this on purpose so you'll have time to adjust your face before it's rocked off. Almost immediately after that there's a shower scene which sucks because there's a guy in it and you have to state loudly that you think it's "gay" or something along those lines so nobody will question your sexuality. Then it's onto the zombies.

The zombies in this movie are the ultimate evolution of the walking dead. Forget the wuss-burger zombies in "28 Days Later" that eventually die on their own, these zombies are the real deal. First of all, these zombies are fast (even the fat ones). Imagine the fastest Olympic runner you've ever seen, now double that speed and pretend the zombies aren't Kenyan. That's how fast these zombies move, which sucks if you're a zombie because you get your balls stomped on by an army of undead ball stompers if you trip (most zombies stomp on your nuts even when they don't have to just out of spite.. or at least I would): 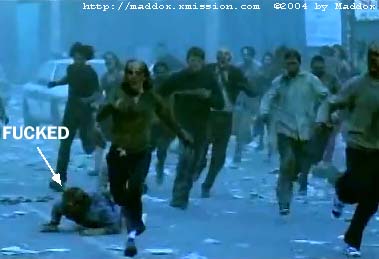 Right off the bat the chick at the beginning (who I'll call Mope Master because she looks like she's about to cry in every scene) gets the beat down by her ex-human now-zombie husband. 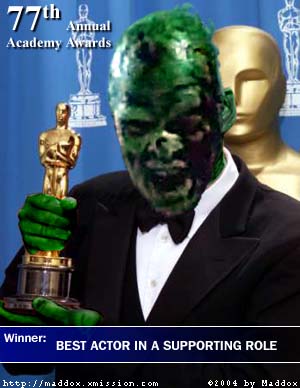 So then she bails and gets in a car wreck because women can't drive. Then Ving Rhames threatens to blow her head off, which is cool. They meet up with some pregnant chick and you know it's going to be bad news because everyone hates kids.

They eventually go to a mall where they're accosted by some dude with a badass handle-bar moustache; before he even says anything, you automatically know he listens to Pantera. His buddies, on the other hand, look like they drink Keystone Light and go shopping for purses. Anyway, the Pantera guy totally wants to bang Mope Master, so he lets them stay in the mall. Then they go around killing rogue zombies for about 45 minutes, no complaining from me. All the zombie actors were awesome and deserve best supporting actor awards for their inspired acting work.

For example, check out the look on this chick's face: 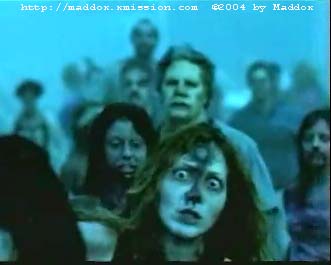 A zombie with a very matter-of-fact look on her face.

She looks like she just got done telling someone "I know you didn't just call me what I think you called me," followed by two quick finger snaps so you know she means business. Think you can get that kind of attitude with ordinary extras? Yeah right. These are thespians; they're pros at what they do. Just sit back and admire their art.

So here I am watching the movie and it's pretty badass, but then out of nowhere *WHAM*. Tits on the screen. Like finding an unexpected $20 in the wash, the director throws in some jugs for good measure. I know you're asking "but Maddox, it already sounds awesome, why go on?" Why indeed; stop reading this article and go see "Dawn of the Dead."