Things Elizabeth Smart could have
done to escape her captors.

For those of you who don't know who Elizabeth Smart is, I envy your ignorance. She's the 14 year old: 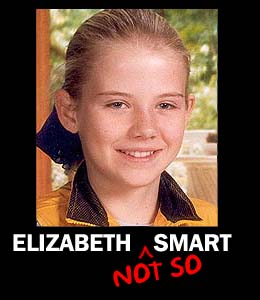 Who was stolen by this guy: 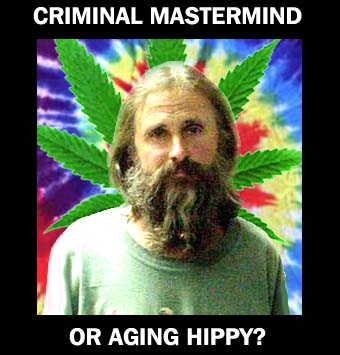 The nut job who kidnapped her calls himself "Emmanuel," and I have to give him credit because Emmanuel is a much more compelling name for a cult leader than "Brian." After he became a suspect, his stepson was quoted as saying "Emmanuel is capable of kidnapping a child."

This begs the question: who isn't capable of kidnapping a child? I mean, how much effort could it take? Kids are stupid, just look at how many of them die in fires every year. Who the hell dies in a fire? How fast does the flame move anyway? Every time I burn my brother's toys, it takes an eternity for the flames to spread. A common house fire spreads about half a mile per hour. Oh no, a fire? Jump through the flames you pussy. If you don't make it everyone's going to think you're a dumbass anyway, so you might as well try. Besides, think how cool it would be if you ran out of the building screaming while you were on fire. Holy shit that would rule, chicks would be humping you left and right (assuming the burns don't scar your junk).

When Elizabeth Smart was finally "freed," her father appeared on TV giving one blubbering speech after another saying "I don't know what she's gone through and I'm sure she's been through hell." I don't think he was referring to the pictures of Elizabeth hanging out at parties circulating on the Internet, the video of her having a picnic at a park, or the hippy drum circle she was spotted at when he referred to "hell."

So to help other children in the future, I've put together a list of things Elizabeth could have done to escape her captors:

1. Walked away.
It turns out that Elizabeth was held at knife-point and was as close as 10 minutes away from her home at times throughout her 9-month ordeal. Here's an idea: walk home. Or if you're a gimp, change "walk" to "hobble" and the same rules apply.

2. Don't use wigs, sunglasses, and phony accents.
If you're trying to break free, cut the bullshit and remove the disguise when you're in public. If your captor walks away from you at a party and starts drinking beer, it's a pretty safe bet he's not a prophet. What are you clinging onto?

3. Don't hang out at parties.
It kind of blows the credibility of the whole kidnapping story if you're seen at a party. Next thing you know you have to make up some crazy shit about being brainwashed.

4. Anything.
Almost a year before Elizabeth Smart was found, there was a 7 year old girl named Erica Pratt who was kidnapped, bound with duct tape around her arms, legs and eyes, and left in the basement of a building:

Did she lie back and take it? Hell no. She broke a window, gnawed through her duct tape, and escaped. She was back home the next day before her parents could enjoy the solitude of having one less kid around, and she's only 7 years old.

So keep these pointers in mind if you're ever kidnapped and you'll turn up at a party somewhere. Or a glove compartment.

2,558,118 girls have been kidnapped and broke themselves free thanks to my kickass pointers.