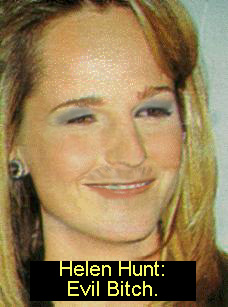 More in response to my recent hate mail than anything else, I've decided to put up an anti-Helen Hunt page.

Why Helen Hunt? Because she's a shitty actress, and a fraud. 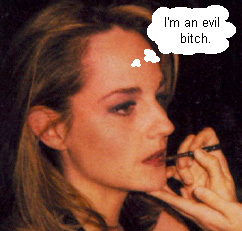 Here is a picture of Helen getting her face painted on. Apparently, makeup has its limits.

I saw an episode of Mad About You once and I couldn't stand it. Helen Hunt was pregnant or sick, and Paul Reiser wanted to show her something in the kitchen. He had to beg and beg until finally she decided to take a look (bitching the whole way). It turned out that Paul had baked her a cake or something, out of the goodness of his heart, and she acted all snooty, and said "That's it?" WHAT DO YOU MEAN "That's it?"?!? YES THAT'S IT. What the hell else do you want? I cook for you, I clean for you, I put up with your bullshit, and that's the thanks I get? Paul should dump her ass, and then he should stop acting, because his acting is the shits.

You'd expect a little bit of gratitude, or appreciation for all your hard work, but no. Nothing's ever good enough for Ms. Hunt. She's too good for simple things like cake. Princess wants it her way. Well I have news for you princess. You can't have it your way. In fact, how about I give you NOTHING. You like that, ho-bitch? Can't bitch about nothing. It's the perfect gift for a hag like you. I'd never expect Helen Hunt to turn down food. I'm sure she eats like a pig, just like the rest of us. She's got to put her guard down some time. 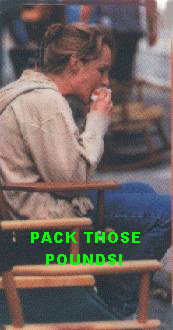 Here she is trying to measure her ego:

Here is a picture of Sata- I mean, Helen Hunt after devouring someone's soul: 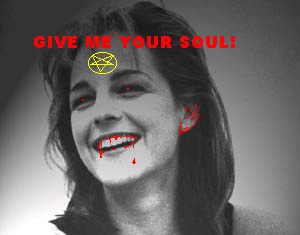 154,360 of Helen Hunt's lawyers have visited this page and plan on suing me.