The other day I saw a commercial for Cheerios on TV. It had some guy dressed up like Ebenezer Scrooge in it (one of my all time favorite story-book characters). He was being grumpy and bitter (carrying out business as usual), and all was good. Then suddenly that damned bee appeared. That little bastard kept flying around and driving Scrooge up the wall with an offer of honey-nut bullshit. Finally the bee broke down Scrooge's spirit, and he gave in. The commercial ended with some kids singing about honey-nut Cheerios, and Scrooge was smiling and playing grab ass with the bee. It made me sick. I was outraged at what they had done; they took a mean old bastard like Scrooge, and turned him into a warm hearted, flower picking momma's boy. Bah! These stories were never meant to have happy endings. They were meant to give kids nightmares and bad dreams. So in this spirit, I've decided to expose the real endings to some popular children's stories. 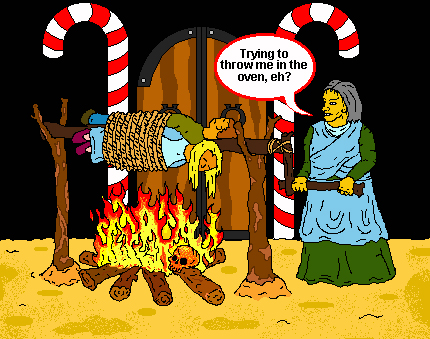 The story of Hansel and Gretel is about two dirty little children that run around and piss off their hard working parents. They're always laughing and screaming without a care in the world because they're selfish little bastards that get everything they want. One day the little bastards run off into the woods in search of someone to throw rocks at. They end up finding a house made out of candy and they start to eat it. Inside the house was a nice old lady that eats children. She invited Hansel and Gretel into her house, but was assaulted and thrown into the oven! She was pissed off and mad as hell. So she busted down the oven door, and put the beat down on Hansel and Gretel. When the two bastards came to, they found themselves tied up and being roasted. The end. The moral of the story is that Hansel and Gretel are stupid little shits, and they deserve to be eaten. 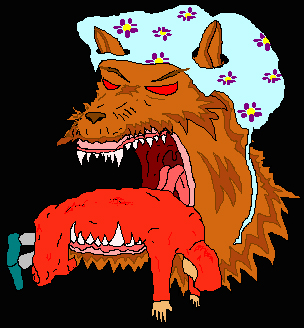 Little Red Riding Hood is a story about a dumbass little girl that doesn't know anything. One day she decided to take some food to her sick grandmother. Little did she know that a clever wolf had eaten her grandmother weeks ago, and only the remnants of her rotting corpse remained. After the wolf ate her grandmother, he went through all her stuff and tried on her clothing. Just then, the dumbass showed up and started interrogating the wolf. She kept asking him stupid questions about why his teeth and eyes were so large, until finally the wolf snapped and ate her. It turned out that little red riding hood was so stupid that she didn't even know how to be eaten, and the wolf got indigestion. The end. The moral of the story is that if you ask too many dumbass questions, you will be eaten. Trust me, I know.

319,909 kids have visited this page and are delighted with the new endings.