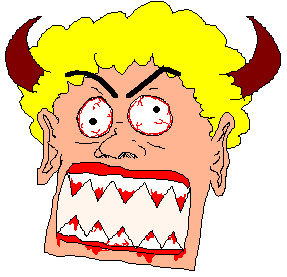 
Feminists are loud, stupid, bitchy and above all: annoying. All they do is run around shrieking about men. News flash: nobody gives a damn. Go away. I'm pretty tired of taking responsibility for some slack-ass women that expect special privilages from men.

Where the hell is the feminist movement today? I looked through some feminist books at the library, and almost every one of them bitched about male patriarchy. Oppression this and equal rights that. BORING. Where's the violence? Nobody wants to read about a single mom trying to raise a kid and keep a job. People want to read about explosions, monsters, and exploding monsters.

I was minding my own business at school the other day when all of a sudden I was surrounded by screaming feminists. They had gnarled claws, horns, goat hoofs and made an unearthly hissing noise. They came out of a hole in the ground that led straight into hell where I could see Satan (Jenny Jones) directing her army. I thought I was done for when suddenly I remembered that I had a shotgun on me (with rounds of common sense).

The feminists started to advance towards me, in all their unshaved armpit infamy, preaching anti-male rhetoric and singing "I am woman hear me roar." One of them jumped at me with a two edged blade of double standards, but I counterattacked with a pile of "Get a job." This kept her occupied, but there were more. I took out my shotgun and blasted 10 or 20 of them, but they kept respawning faster than I could finish them off. It was almost as if they had a hidden energy source. Suddenly I noticed the source of all my problems: music coming out from the pit of hell! It sounded like a mixture of Jewel, Celine Dion, Alanis Morissette and Loreena McKennitt all packed together for a mega dose of super suck.

I had to act quick before the effects of the shitty music would turn me into a permanent dumbass. So I grabbed my shotgun and jumped into the pit. I fell through all the levels of hell, each level conveniently marked with signs saying "Level 1: Expensive Trendy Clothing, Level 2: Dance Clubs For Sluts and Assholes.." etc. until finally I reached the last level where Jenny Jones herself resides. She immediately tried to give me a makeover, but I busted out a can of woop ass wrapped in a package of "Shut the hell up," which seemed to wound her ego. She tried and tried, but couldn't get me to conform. Finally she blew up like a zit, and that's the end of my feminist story. The moral of the story is that feminists are bad, evil people, and listening to too much shitty music will turn you into a dumbass. It's all true, I'm right, go to hell.


310,092 feminists have felt compelled to bitch at me because of this page.