Five shitty movies that everyone loves.

Ever watch a blockbuster movie that blows so much that you feel like you have to scrape a layer of turd-shaped photons off the back of your retinas, yet everyone else in the universe can't wait to fellate the director of the big-budget shit festival you just watched? I know I'm not the only one who walked out of "Willow" thinking "too bad I don't know any midgets so I could remind them that the golden age of midgetry will soon pass and that I will always be taller." Just kidding, that was mean; there was no golden age of midgetry.

So here are five of the shittiest movies that everyone loves: 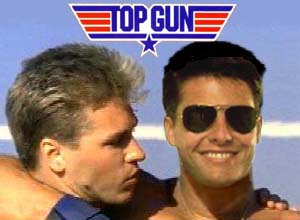 1. Top Gun
For those of you who don't remember, "Top Gun" was the movie about a bunch of guys who stand around high-fiving each other for about 90 minutes. The movie focuses on some loser named "Maverick" who penetrates deep into the coveted veil of the top gun academy of smug, sexually frustrated aviators. I know many of you reading this will probably think I'm exaggerating when I say this (since I exaggerate everything, except for my manliness which is enviable), but there were no fewer than 500 shower scenes in this movie. The wardrobe for this film must have consisted of a towel, a jump suit, and 50 pages of gay innuendo, because the rest of the time Tom Cruise and Val Kilmer were walking around naked eyeing each other's packages.

Then as if the director didn't think all the high-fiving and shower scenes were suggestive enough, there was a gratuitous scene in which all the guys got oiled up and played volleyball. Every few minutes I half-expected to see Cruise and Kilmer lock lips to a ballad of "It's Raining Men:"

If you remember having good memories of this movie, then it was probably because you were too young to know what was going on, or an idiot. Don't bother resurrecting this classic to prove I'm right. 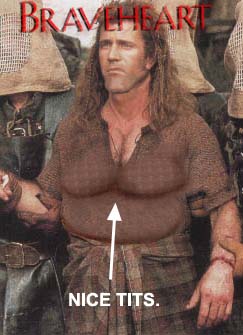 2. Braveheart
Synopsis: a portly Mel Gibson stumbles around in poorly choreographed battle scenes in which the camera men can't hold their cameras still long enough for you to realize the extras in the background are standing around with their dicks in their hands.

I'm sure if you're a fan of Braveheart you're probably saying "BUT MADOX YOU ARE MISSING THE POINT OF THE MOVIE, WHO CARES ABOUT CAMERA WORK LOL?" Everyone always thinks the battle scenes in this movie were awesome; even people who didn't like the movie say "...but the battle scenes were done well." What the hell do you know about battle scenes? You're a team manager for an insurance company, go manage something. People watch Mel Gibson running around with his bitch tits for a few hours and they suddenly think they're experts on swordery (swordery is like sorcery with swords).

Why does every battle scene in the universe have to have a shaky cam? Just whose view point are we seeing this from anyway? Wow, the cam is shaky, I feel like I'm right in the battle, looking through the eyes of some idiot who can't fight, yet he still can't focus on an object for more than a few seconds. Hey assholes, here's an idea: how about the perspective of someone who got stabbed in the face? The camera would just sit there staring up at the blue sky as an occasional limb would come flying across, or someone would trip over his body. That would be tits.

Speaking of tits, did Mel Gibson look pregnant throughout the whole movie or what? Check out this profile: 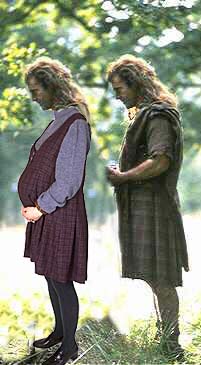 By the way, the picture above was not photoshopped; the pregnant woman didn't have blades of grass covering her feet in this scene. I rule. 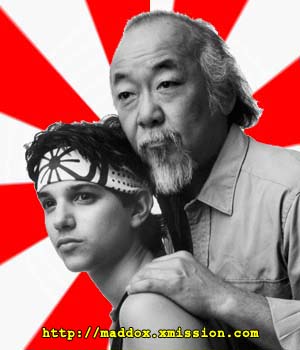 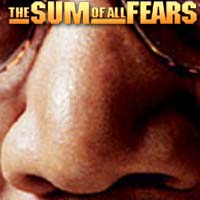 During this movie the only thing on my mind was "holy shit, that son of a bitch has a huge nose." Seriously, I've seen cocks on horses smaller than the shoe horn on Morgan Freeman's face. It looks like someone slammed a potato in his face and he decided to keep it out of spite. I have no doubt he could smuggle four or five illegal immigrant families up his nostrils if he tried (assuming of course that the option to smother them wasn't available).

The plot of this movie is a classic Tom Clancy mind dump. His stories are so mundane and formulaic, you could teach them in algebra (the syllabus would read: Chapter 1 - how to FOIL binomials and terrorist plots, at which point you would drop trow and pinch off a loaf on the teacher's desk for being such a corny bitch). Anyone could string together a Tom Clancy plot. Don't believe me? Try it:

Imagine a movie about an honorable samurai clan filmed in New Zealand and starring an American. Am I the only person who sees a problem with this? Where do we draw the line? I mean, why not make a movie about Zulu warriors starring James Hong? Or a movie about US Marines starring drunken kung-fu master Simon Yuen? 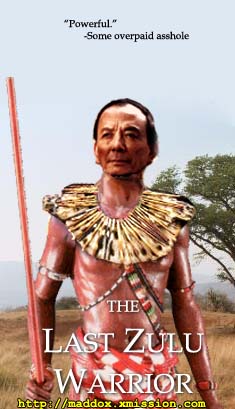 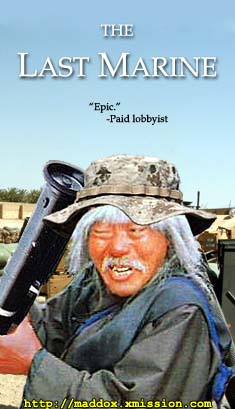 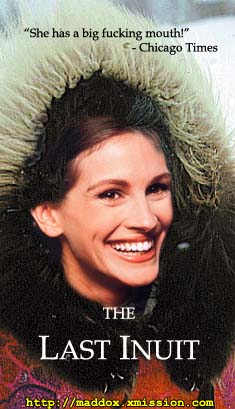 If I had a chance to remake "The Last Samurai," it would star that chick who played Miranda on "Sex and the City," and the setting would change from ancient Japan to biblical Japan when it was submerged under water. The movie would mostly consist of her drowning. Oh man that would rule so hard. I love myself.

5,452,705 people are going to rent these movies to see if they're really as shitty as they remember.