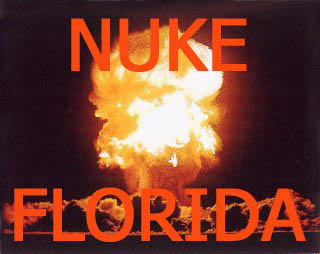 I'm sick of Florida. It seems like only last week when Florida was in the spotlight again with that little shit Elian Gonzalez... who cares? Really, nobody cares about Florida or its shitty orange juice. Everyone in Florida is old and should be shot. How the hell can people mess up their votes so bad? The ballot couldn't possibly be any more straight-forward. There was a big arrow pointing to the slot to punch for whichever candidate they might have wanted, yet they manage to screw up.

You know, the fact that people with the intention of voting for Gore were confused about who they were voting for says volumes about what a dumbass Gore is; just look at the dumbasses voting for him. Who the hell wants votes from people so damn stupid anyway? They should have used this:

Florida has no excuse not to have their votes in on time if California made the deadline. Not to mention the same "butterfly ballot" that confused so many geriatrics in Florida was used in Iowa and you don't see them bitching.. what the hell? Okay, you know what should be done? Nuke Florida. Nobody important lives there and we can substitute beef gravy for orange juice. Oh man, beef gravy kicks ass.

531,426 morons from Florida attempted to email me but typed my address wrong.