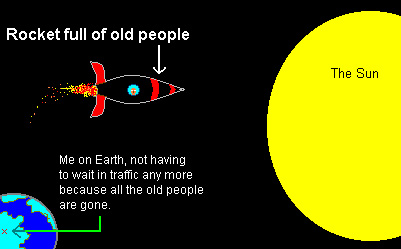 At first, I didn't think that wrinkled bag of shit deserved to go into space again, but now that I think about it, it's a great idea. I think more old people should be launched into space. Permanently. You see, it's a great idea because old people are so easily tricked! You just tell them anything, and they'll get confused all to hell, and then while they're not looking, you push them into the rocket, slam the door shut, and launch the bastards straight into the sun.

It's a simple plan. I call it by its code name: the "Get rid of all the old people by launching them into the sun, because they're worthless" plan.

But of course, like all great plans, this one has its hitches. I know there are going to be some bleeding heart sissies that are going to think it's wrong to launch old people into the sun. But don't worry, I've got a plan to deal with them too.

First, we hire billions of lumber jacks to take down as much of the rain forest as they can. Bonus to every team that causes the extinction of another species. Then, while all those hippies go down to protest the chopping of the trees, we fence them in and set the whole place on fire. If they complain, tough shit. They shouldn't have been so stupid to fall into our trap. Suckers.