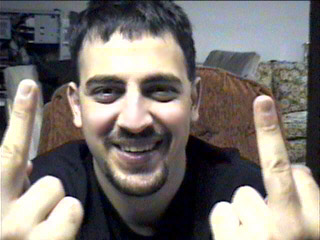 I've been trying to avoid putting up another page about Gothics for a while now, but recently I've been getting a flood of emails from dipshit Gothics that don't know the definition of satire and sarcasm. I received the following hate mail just the other day (spelling and grammar errors highlighted in red):

I don't know what they've been through? What the hell are you talking about? What exactly have they been through? Maybe a course in bigotry, bias and blind submission? I'm putting down people that make a difference? My bad, I forgot about the whole gothic humanitarian movement. Gandhi and Martin Luther King had better watch their ass; they have some competition of the gothic persuasion. It's ironic that you're complaining because I put down people for "standing up for what they believe," while the reason you're writing to me is because I too am standing up for what I believe. By the way, I think you might want to leave gothic representation to someone that can spell from now on jackass.

What I don't understand about Gothics is the double standard they use with people. First of all, if I were to put up a Gothic web page viewing their lifestyle in a positive light, then I wouldn't hear any bitching from their camp even though it's still just my opinion. However, I've chosen to put up a gothic web page that doesn't view them in a favorable light and I'm bombarded by gothics that don't like what I have to say, even though it's just an opinion, positive or not! Biased morons.

I challenge any gothic out there to send me the universal definition of a gothic. I've been to some of the biggest gothic web sites on the internet and none of them have a consistent, universal or even coherent definition of what a "gothic" is. As far as I'm concerned, it's just a label. End of story. Just another group of people starving for attention. There's nothing unique, interesting, mysterious or inherently intellectual about these pseudo-intellectuals. What's the point? Why don't these people get their own opinions and stop trying to fit into the rules of a group they didn't invent. Uncreative, un-innovative and most of all uninteresting. The whole "tortured artist" facade is tired. I'd like to use a quote from one of the authors of gothics.org, on the definition of gothics:

"But what does gothic mean in regards to the group of people? Here's where it gets confusing. There are things that many Gothics like that are not gothic (Industrial or Classical music). There are things that are gothic that many Gothics dislike (vampires, interest in death). There are things that some people think are gothic that are not gothic (bands like Marilyn Manson and Nine Inch Nails), and there are things that do not call themselves gothic even if they are considered gothic by most people (bands like Sisters of Mercy and Dead Can Dance). However, there's no Grand Gothic Judge to decree what is truly Goth and what is not, although there are plenty of people who claim to be it. It's an ambiguous label with many people using it that don't understand what it means. The people who do understand it often have many different definitions."

Highlighted in red, the author states that it's just a label. The use of the word "ambiguous" in front of "label" serves as a buffer that doesn't change the fact that it is indeed just a label. As stated, there is no "gothic judge to decree what is truly Goth and what is not," implying that there is no universal definition. How trivial and boring.

I received an email from a gothic a long time ago that stated:

I bet you don't even know any Goths because if you did you would know that most of us are the most intelligent, unique, intresting and creative poeople you will ever met.

Many goths seem to adhere to this mentality. That they are some how MORE unique and intelligent than the rest of us. Not only is this insulting, but blatantly false; testimony to this fact being all the poorly written email I receive from "goths." Ironically, since most goths (and by "goths," I refer to their "culture" or "subculture" as they've defined it) seem to think that they are somehow more intelligent, interesting and/or creative than the rest of us, this alludes to another character trait entirely, or namely, arrogance. Boring, arrogant, uninteresting, un-innovative gothics. I believe this issue has been exhausted.

689,920 gothics have apologized for sending me hate mail after I proved them wrong.