Let's give Gothics a reason to be depressed. 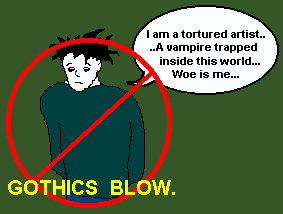 Gothics. When they're not getting their asses kicked, they're busy getting drunk and having sex with dead animals.

They give me diarrhea. What the hell's wrong with them? They always look pale, weak and sickly. Nothing a reality check can't fix. But no, they choose to dress up like french poets and walk around like vampires. Why don't you losers get a life and quit pretending like you're depressed? Maybe then people will stop treating you like the dipshits that you are, and you'll gain some respect. You know, I've done my homework. I've probably checked out over 50 pages by people who consider themselves "gothic." I've read over 20 definitions, and none of them were consistent. They're quick to label themselves as gothics, but they can't even pick a definition and stick with it. Instead, they allow people like myself to stereotype them by aesthetics. The bottom line is, that there probably isn't a universally accepted definition of a gothic because the entire movement or lifestyle (or lack thereof) revolves around just that: aesthetics. Sounds trivial and unimportant to me.

Don't get me wrong here, I have nothing against depressed people. As I come to understand it, most gothics aren't even depressed. They just act that way because they're cowards. Cowards afraid of dying. I almost laughed out loud when I first read this. Afraid of dying? Why is this even an issue? Well tough shit. If they're so afraid of dying, then they shouldn't have been born. Not my loss.

They're so afraid of death and dying, yet they smoke, drink and have unprotected sex. I know not all gothics are like that, but I don't give a shit about being politically correct. So don't mail me saying "On your page you said all [insert name of dipshits here] are [insert stereotype here]." Yes, I know. Nobody cares. My point is that gothics are shitty, and something should be done about them.

I propose that we build a giant cannon, gather up all the gothics, pack them into the cannon, and launch them into a brick wall. SLAM. No more gothics. Maybe then they'd have a reason to be depressed. That is, if any of them lived. They're all so pale and weak that a mere launch into a brick wall might finish them off.

I was going to talk about this girl I went to high school with that was a shit-eating gothic, but I'm too tired. Just take my word for it, she was shitty.

385,964 Gothics have threatened to cast spells on me because of this page.