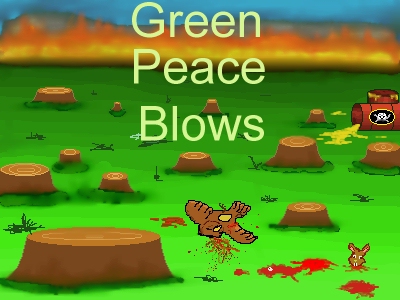 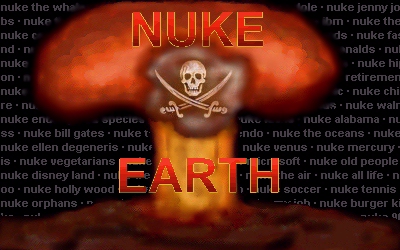 Preserving the Earth: Who Cares?
I'm pretty damn tired of the bitchers bitching about pollution, animal rights, and nuclear arms. It's almost getting to the point where you can't go down to a fast food store and pick up a burger without getting petitioned by the dipshits. They're always wailing about something. "Save the rain forests.. Animals are people too.. Save the whales.." blah blah blah. It's all bullshit.

Why conserve anything? Nuclear waste is awesome. I've never seen a a do-do bird, or a zebra-tiger (whatever the hell it's called), or most of the other now-extinct species. Guess what? I don't care. What difference will it have made if those animals were alive today? Nothing. Maybe if they were alive today, I'd have a chance to eat them, but other than that it makes no difference.

I've been hearing a lot of environmentalist propaganda on the radio these days. One of the commercials starts out with some kids sitting around their grandfather, listening to what the world was like when he was a kid. He mentions something about water, and the kids ask him what water is (in the future, water, air, trees and everything doesn't exist, and everybody has to breathe out of air tanks). The grandfather goes on and on about how wonderful water was, and the kids pretend they're amused. After a few more minutes of brainwashing, the commercial ends with some pseudo dramatic punch line like "conservation. isn't it about time?" or some other such bullshit.

The other commercial is similar, except this time the idiot kids are in a museum of trees, and they see a tree for the first time. Then the museum guide talks about flowers, and the kids say "what's a flower?". Then the kids ask what a fish is, and they act surprised when they find out people didn't always breathe out of air tanks. Oh how sad. The poor kids never had a chance to know what it was like to climb a tree, or to play in a pool of water. They don't know what a fish looks like, and somehow the 73% of water on the earth's surface has entirely disappeared, and flowers have been entirely eradicated. Now I'm depressed. Maybe everyone should kill themselves because a world without trees or water is a world we shouldn't have to live in. Please.


At least 254,935 animals have died since I've been alive, just because I was hungry.