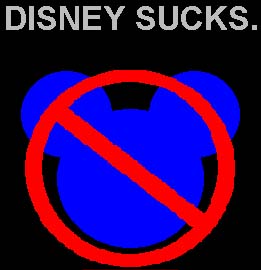 Disney. This is something that's been bothering me for a long time. Possibly the worst media company in the world. Not in terms of their animation quality, as it's some of the best out there. I'm talking about their content (or lack thereof). Why do people associate Disney with "family values"? Because the characters are cute and happy? Because of the incessant and pointless singing? Or maybe because nothing ever goes wrong in the Disney universe, and it's comforting for irresponsible parents to know that they can avoid spending time with their kids by putting on a video, and saving a few bucks on a babysitter at the same time.

I can't stand Disney. The theme park blows, the channels blow, and above all, their movies blow. The theme park is easily one of the worst things about Disney. There are maybe six rides potentially worth going on, not taking into consideration the 45 minutes of your life you piss away while waiting in line. Then once you finally get your turn to sit on a sticky, disease caked seat, you'll get lectured for 10 minutes about the various ways you'll get maimed and crippled by putting your hands outside the cart. Then, if the ride operator is feeling merciful, you're in store for one hell of a ride (on your way home from Disney land), but until then, you're stuck listening to "It's a small world after all," over and over until you just can't stand it anymore and you start tackling the puppets.

I felt so sugar coated and sweet after that ride, that I had to hit someone just to get rid of the feeling.

The only thing available to watch in Disney land is invariably the Disney Channel. It's bad enough that they have a chunk of America locked away for their propaganda, but they have 3 or so separate Disney channels to brainwash people as well. The channel usually airs reruns of Whinny the Pooh, and some show about this stupid girl that goes around and talks to people. Who the hell wants to see that? Where are the robots?

Then there are the movies. Long, boring, sappy movies pushing unrealistic ideals and self-proclaimed family values. Is all the singing necessary? Can't someone walk through a town without singing about work or love, or some other such pointless task or emotion? Why don't they make a Disney movie in which everyone dies at the end? Why don't they foreshadow life itself for a change, and quit filling kids' heads with notions of happy endings and talking candle sticks? Disney sucks. What else can I say?

215,206 Disney supporters have contacted herr fuhrer (Michael Eisner) about my page to have it removed.