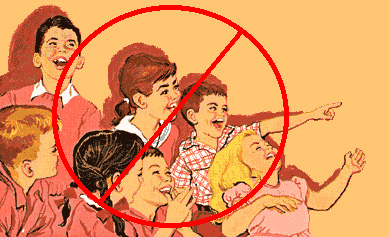 
Kids are stupid. They're always running around with their sticky hands and filthy Star Wars toys, completely oblivious to their surroundings. Irresponsible, lazy, and worthless. I saw a kid on a Chex commercial today. The kid was laughing. Laughing because he likes the noise it makes when he eats cereal. The kid was trying to be cute and funny, but ended up being annoying and repulsive. The commercial gave me diarrhea.

You know.. you're pretty much a pile of shit if you're content with living your life eating cereal and laughing at the noise it makes. Why don't these worthless kids get a job? Child labor laws--my ass. We need to make new child labor laws, forcing kids into work at an early age. If their backs don't hurt, then they aren't earning their living.

I mean, kids need real jobs. None of this selling lemonade at the corner of the street bullshit that they do now. The other day, some ugly little kids were trying to sell piss-warm lemonade to people driving by. Like anyone's going to go out of their way to stop, buy some diseased sugar water with dead flies in it, just to help out a group of dirty little shits that don't have anything better to do.

Not that they know what to do with the money once they get. They usually fritter it away on legos and Britney Spears albums. Speaking of Britney Spears, she blows.

I also saw a Rice Crispies commercial the other day. It started out with some short, uncoordinated little shit trying to reach the Rice Crispies on the kitchen counter (I was hoping it was one of those commercials where a pot of boiling water scalds the kid; you know, the ones that are supposed to give irresponsible parents a guilt trip). But no. The kid got his rice crispies, then the MUSIC started playing. "Snap crackle pop... wake up call to the world! Snap crackle pop..." That whore. Then the kid snuck into his baby brother's room and placed the bowl of cereal right next to his head. The baby woke up and looked around. What the hell? The last thing you want is a baby that's awake. Babies are loud, stupid, and they shit all over everything.

Just as the baby woke up, the door cracked open. It was the mom. She looked into the room and tilted her head, as if to say "Awwe.. isn't that cute?" NO. YOU STUPID BITCH. YOUR KID COULD HAVE BEEN SCALDED BY BOILING WATER. Pay attention next time. Damned irresponsible parents. If you're not going to supervise your little brats, then don't have kids. We have enough jackasses running around as it is, we don't need more.

People tell me that I shouldn't have kids. Why? I think I'd make a great parent. My kids won't be screwed up little bastards. They'll be great, just like me. I won't tolerate failure, like all those other parents. No son of mine is going to fail. We need more winners, and less losers. If you can't cut it, then you're weak. Inferior. Worthless. A bad seed. A sour grape. What's with sour grapes anyway? Why are they considered bad? I like sour grapes, so piss off.