For those of you that are fortunate enough not to know who I'm talking about, Helen Hunt is the lady on the TV show Mad About You, the movie As Good as it Gets, and the movie Twister. John Leguizamo is the violator in the movie Spawn, Luigi in the movie Super Mario Brothers, some dork in the movie The Pest, and himself in a short lived Fox show called House of Buggin.


Why do I hate Helen? Well, just look at her eyes. Look at them for a long time. Don't pay attention to anything else but her eyes. You'll see what I saw too. After you stare at her eyes long enough (maybe 5-10 minutes), look at her face as a whole. You'll notice something strange you probably didn't notice before: she's a fake. It's almost as if she's concealing something. What is she hiding behind her smug grin? Does she think she's better than me? She's a fraud. There's something about her that has yet to be revealed. In the mean time, she should be locked up in a cage, just to be on the safe side.


John Leguizamo is just annoying. If he stopped breathing, good. He's an ass. He's like that kid in everyone's child hood that never got invited to go anywhere but came along anyway, and when he did, he ate all your french fries and farted all the time, and then stole your toys when your back was turned; that jerk. 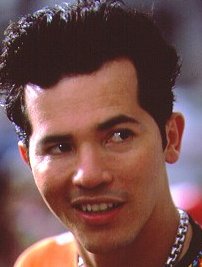 You see what I mean? His face just begs to be kicked.