When I become a hermit,
the sign in front of my door
will read: 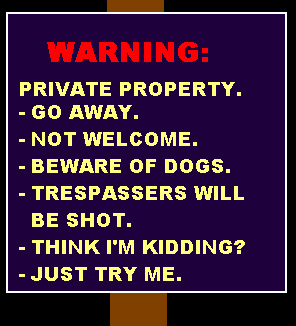 Sick of people. Kids. Jocks. Executives. Tired of TV advertisements.. tired of the bullshit. Jenny Jones, that whore. Her show denounces the extreme lifestyles of her dumbass guests, but in the same time glorifies them. Then we have legions of dumbasses in high school that think they're in control of their lives, and that they can do anything. So they live their lives to the fullest and rebel against their parents and community. They dress up like freaks to attract attention. Those little shits. They don't know a damn thing. I'd have the good sense to kick every one of their asses.

Maybe then there will be less dipshits driving around while talking on their cell phones. I hate that. If you can't drive and talk on the phone at the same time, pull your head out of your ass and stop doing it. DAMMIT. I'm so sick of dodging people left and right on the freeway. People swerving in and out of lanes, screwing around with their cell phones and their slutty under-age girlfriends. Oh sorry Mr. Big shot, go ahead and run me over. While you're at it, why don't you take out a bridge or two and cost tax payers more money. Money.. after all, that's what runs this world.

Greedy bastards out to stiff you. Money? Who cares. What good is it? What good is money if you can't rule the world with it. Even if you do, some asshole will come by and assassinate you. I just can't win. What the hell? Anyway, as I was saying, I'm going to become a hermit and move up to the mountains. Not to be closer to nature; that's for wimps and commies. I just want to be away from bullshit (and by bullshit I mean people, music, car commercials, Disney, and the governor of Utah- evil bastard).

Great. Now I feel miserable. I think I'll go watch Ren & Stimpy. What do you think? Should I become a hermit? Drop me a line.