How to ruin someone's day: 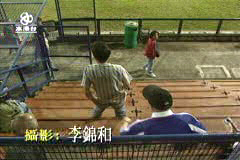 Click here to view the mpeg (NO LONGER AVAILABLE)


The movie file in the link above features two guys arguing at a soccer game. The guy on top gets pissed off and kicks some ass. The lower guy's day is pretty much ruined. Speaking of ruined days, here are some things that can ruin mine:

Now here are some things that can make my day better:

That pretty much covers it. Actually, there's a lot more... but I've lost interest in writing about this. Like anyone cares.