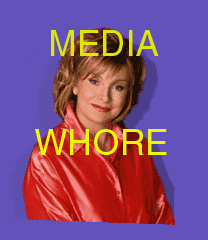 I hate everything about Jenny Jones. Her stupid show. Her asshole guests. Her shitty music. Her shitty graphics, and that bitch that announces each segment. I hate her.

Every show is the same. "My gothic queen is too obscene" or "Outrageous hair makeovers". Hair makeovers? What a shitty idea.. 'the hell were they thinknig? Nobody wants to see a bunch of dipshits get a hair makeover. Those jerks. You know what I hate most about the show? Jenny Jones. And after that, I hate all those asshole guests. They always come on the show fishing for something to bitch about. "You teased me when I was in third grade, and I altered my whole life.." and then they show the "before" and "after" pictures. The audience usually bitches at the "bully" for teasing them when they were younger, but listen to the audience's reaction when they see the before pictures: "eeww..", "gross.." and "holy shit she looks like dog shit".. okay, I made that one up (I would have said it if I were in the audience). Then Jenny rails on the bullies for teasing them, as if she's so much better than them. She herself winces in disgust at the before pictures.

I hate them all. If they were all killed, I'd laugh. They think they're so better than me? Who the hell do they think they are? Worthless. If I went on the Jenny Jones show, I'd kick some ass. "Oh.. don't like my haircut? How do you like my hair cut with my foot up your ass?" Then I'd kick my foot up their ass.

Then some slut from the audience would stand up and say something like "I think you should sit down because you're jealous-"
And before she could even finish her sentence.. *WHAM*. I'd punch her head off. "How's that for jealousy, bitch? Do you like that? I'm talking to you. Answer me. Oh. Oh.. that's right, you CAN'T because I RIPPED your head off.." Then I'd laugh in her face. "How do you like that, bitch?" Then some guy would get up in her defense and say "I think she's right, and that you should stop being a jerk"

"Who you calling a jerk, ho-bitch?" Then I'd drop kick him through the wall. "Yeah, that's what I thought. Wench."