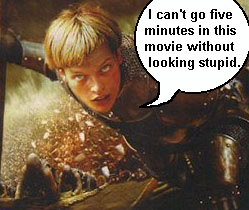 I just watched one of the worst movies I've seen in a long time: "The Messenger." One word: avoid. Seriously, this movie is ass. It was depressingly bad. I hate this movie. The director, Luc Besson, was horrible; the story was patchy and the fight scenes--I don't know how the hell they did it, but they even botched up the fight scenes. Yes, the director Luc Besson managed to make violence boring.

Milla Jovovich played the part of "Joan of Arc" in this horrible, horrible movie. Why did Besson pick her? It couldn't have been that they were married during filming of this movie... only a complete idiot would do something like that. Oh wait.

Besson took something potentially cool and turned it into a LONG, boring, dragged-out shit-fest. Don't listen to any positive reviews of this movie. I can't emphasize enough how bad this movie is. Near the end, just when things start to pick up (because the movie's near the end), you're body slammed with a steaming pile of suck from Dustin Hoffman who plays himself in a robe. Don't ask. Also, at the beginning of the movie there was a rape scene that was WAY bad and the dumbass director kept peppering the whole movie with it (flash backs my ass, we don't need to see that again--even seeing it once was too much). What the hell was he thinking? Depressingly bad.