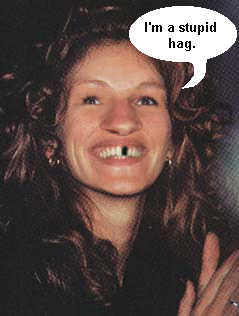 I can't stand Julia Roberts. She was the hag in the movie "Pretty Woman" and "My Best Friend's Wedding." She plays herself as being wholesome and fortified with vitamins, but I know her kind. That bitch.

Some people consider her "America's Sweetheart." That's bullshit. She's a lying whore. Just look at her. Lies. She just doesn't know when to quit. Someone should say "hey listen. we've had enough of your bullshit. We're not going to take it anymore." Then she should be thrown into a pit (with burning hell maggots).

She goes on my official "Super Bitch" list, right up there with that whore from the Crest commercials. I hate her.