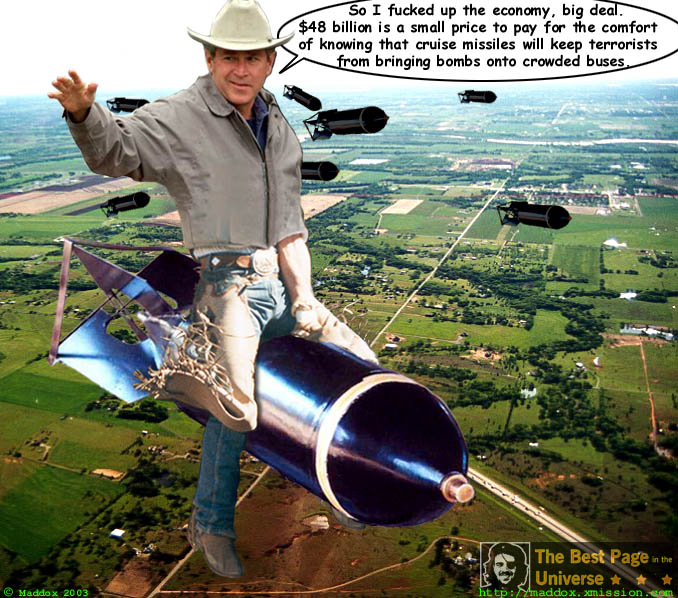 Until recently, I didn't think anyone liked Bush. All of this changed a few months ago when I spoke to someone who not only didn't think Bush was a moron, but that he was doing a good job. I did the usual probes for sarcasm and eventually came away empty-handed. It looked like this was the genuine article: 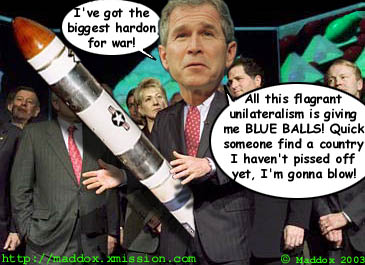 I was talking to an authentic Bush-lover. For the first time in the 2+ years he was appointed to office, I finally found one of these elusive, almost mythic people.

I was excited, so naturally I had to ask the obvious question: "why did you vote for Bush?" The response: "because I'm a republican."

I suddenly felt a sharp stabbing pain in my frontal lobe; it was the unmistakable feeling you get when you walk away from a 30 minute conversation with a yammering co-worker--the feeling you get when you know that you just got dumber. Because "I'm a republican." What the hell does that mean? So just because you're a republican you're supposed to vote for whichever asshole your party selects as your candidate? Why can't people disassociate themselves from their party? There was a unanimous outcry from everyone when dumb shit Trent Lott gave the thumbs up to Thurmond, why weren't republicans supporting him? If you're going to justify your voting of a moron into office with a blanket statement like "I'm a republican," why not be consistent and stand behind your party all the time?

I'm tired of people defending Bush. He's a moron. Period. What difference does it make if he graduated from Harvard, Yale or MIT for that matter? Just because you graduate from an accredited university doesn't mean that you're suddenly void of giving a bad speech. It doesn't make you impervious to mistakes. I'm tired of people saying "just because he talks slow doesn't mean he's stupid." Bullshit. There's talking slow, then there's just plain ineptitude. It's almost impossible to do a critical analysis of his speech because the man practically satirizes himself. Bush proponents have adopted a kinder word for inept: "Bushism." That's stupid. Why is it a screw up if anyone other than Bush makes a mistake, but a "Bushism" if he does it? When Clinton screwed up, nobody called it a "Clintonism." They called him a dumbass (and if they weren't, I sure as hell was). I mean, talking slow is one thing but to not know the difference between "hostile" and "hostage," or "prosecute" and "persecute" is not a "Bushism," it's extra-strength dumb. Before you email me "BUT MADOX HE DOESN'T WRITE HIS OWN SPEECHES LOL," consider the following quote:

"People make suggestions on what to say all the time. I'll give you an example; I don't read what's handed to me. People say, 'Here, here's your speech, or here's an idea for a speech.' They're changed. Trust me." -George W. Bush in an interview with the New York Times, March 15, 2000.

For some reason I trust him. Okay, so maybe I'm being too hard on the guy. After all, he was appointed as the leader of this country. So here are all the things that Bush has done to impress the hell out of me: 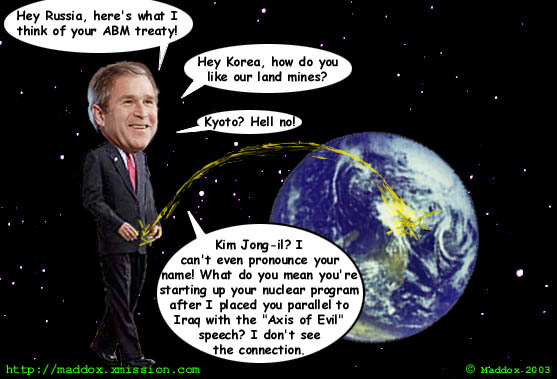