Five things that sucked about Lord of the Rings. 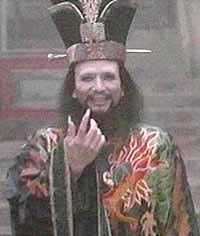 1. It didn't have Lo Pan in it.
That's right. I'm talking about the perpetuator of ass kicking himself, Lo Pan from Big Trouble in Little China: one of the best movies ever made. Lo Pan, for those of you who are adept at depriving yourselves of things that rule, is an evil war lord cursed to roam the world in spirit form. Basically he runs around stomping people's holes who piss him off (which happens to be everyone). Lo Pan doesn't take shit from anyone; exactly the kind of character Lord of the Rings needed. If I directed the movie, I'd have casted Lo Pan as the lead, instead of that pussy Frodo. With Lo Pan in the movie, it would have been about 5 minutes long: first scene would have been Lo Pan ruining everyone's shit, killing all the babies and then spiking midgets off the ground. Oh man.

2. Not enough lesbians. In fact, there weren't any.
So I paid $7 to see a movie with really high acclaim and great reviews; surely it was reasonable to assume that a movie of such supposedly high caliber must have lesbians in it. Expecting a solid two hours of lesbian mud wrestling, I was rendered impotent by chunky midgets with hairy feet instead. What the hell? I'm not the only one who feels the lack of lesbians hurt the movie overall. In fact, I overheard a lady behind me whispering to her boyfriend "no lesbians? this is bullshit!" I want my 8 hours of my life back. Which leads me to my next point... 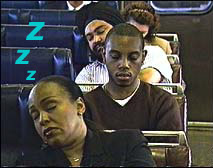 3. The movie was actually longer than the book (go figure).
In the time it took to watch this movie, I could have read the book, filed my tax return, proved the Riemann Zeta hypothesis and still had time to write a page about how boring the movie was. This is a picture of me during the movie that my friend took; this movie was so boring that I turned into a middle-aged black woman when I fell asleep. Damn. It seems like every time some long-ass boring movie comes out, everyone gives it rave reviews (except for that dog shit Water World, not that I've seen it asshole). If this movie was any longer, it might have even been a contender for the longest movie ever made: Brave Heart. I have the attention span of a Fox News reporter when it comes to watching movies, and I was bored to tears near the end, and at the beginning... and during the middle part.

4. The king of Fairies was accidentally miscast as the king of men.
King of men my ass. This chump change was pissing me off left and right during the movie. "I'm afraid of the temptation.. I'm afraid... boo hoo, I'm a sissy boy, don't give me the ring, I might start wetting the bed again." What a pussy. If there was an Ogre about to kick my ass, which is impossible to imagine because I'm so tough that I can rip a phone book in half with my eye lids, I wouldn't let this nancy defend me. "Piss off Fairy King, I'd rather die." 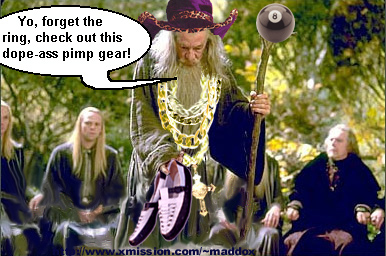 5. It didn't have the Gandalf pimping scene in it.
Am I the only one who noticed that the entire Gandalf pimping scene was missing from the movie? I'm talking about the scene in which Gandalf happens across a magic crate full of enchanted pimp armor. The armor renders the wearer into a super-suave womanizing sex machine. After Gandalf discovers the magic garments, he journeys to the land of the golden shower on a pilgrimage of self-discovery to unleash the true power of his staff. During his quest, he's accompanied by his friend from the east side, Cop Killa. Together they bring down the law and clean house on an illegal pimping monopoly which dominates the market of fine Hobbit bitches in Hobbitville.