By now everyone is probably aware of McDonald's new ad campaign: "i'm lovin' it," which is really a contraction of the phrase "i am loving it," that happens to be an anagram for the phrase: "ailing vomit." Ah the irony.

Abandoning their last two shitty marketing campaigns, McDonald's no longer loves to see you smile, and instead, would love for us to cut the bullshit and buy a Big Mac (especially now since the company posted its first ever loss of $231 million last year). That is, if you happen to fit the demographic of their new marketing campaign. To quote Mike Roberts, president of McDonald's USA:

"Our 13,500 U.S. restaurants are uniting behind this new brand message and energy. We are focused on bringing the i'm lovin' it theme to life not only in our advertising but also for every customer who visits our restaurants. This world-class marketing strategy is the latest element of our overall plan to continue revitalizing McDonald's for our customers through compelling food choices, great service and restaurant operations, motivating value and exciting new restaurant decors."

Exciting new restaurant decors? I don't go to restaurants to eat decors, asshole. Who gives a shit about decors? How about focusing those efforts on making your food taste non-shitty for a change? No matter where you go in the world, you'll always find McDonald's serving up the same bland pig shit they serve everywhere else. Not to mention the only way you can enjoy the food is with a full bottle of Kaopectate:

According to a McDonald's corporate press release:

"i'm lovin' it is a key part of McDonald's business strategy to connect with customers in highly relevant, culturally significant ways around the world."

Translation: the focus groups they used happen to listen to rap and hip-hop. In an effort to show that McDonald's is "down" with their customers, they bought off a few rap artists to pose with this goofy white guy and their dumbass mascot: 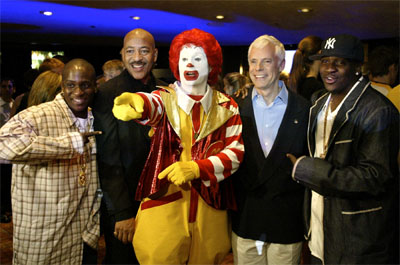 Pointing his finger defiantly, Ronald is no stranger to rap music.

Everything about the new campaign is engineered to target "the culture of today's consumer." Apparently the culture of today's consumer doesn't mind the implied discrimination with the use of specific grammar and punctuation used in the new slogan. After all, cheapened cultural identity is a small price to pay for discounts on Big Mac value meals. the slogan "i'm lovin' it" is all lower case, using relaxed, non-formal language with liberal use of contractions. it's a brilliant move on mcdonald's behalf since not many people know that capitalization does not reflect the attitudes and culture of today's urban youth.

Using popular hip-hop, R&B, and rap artists in "five cutting-edge, high-energy television commercials" is also a brilliant move on McDonald's part. Ethnic stereotypes have bottomless wallets and are eager to spend their money on grease-saturated hamburgers sold by any company willing to identify with their values. To quote Bill Lamar, senior vice president and chief marketing officer of McDonald's USA:

Anyone who has an emotional bond with McDonald's, or anyone who can relate anything they love about life to a company that sells deep fried processed chicken meat should be stabbed in the face. The only bond this campaign is rekindling is that of my ass to the toilet. I'd rather have my skin sand blasted off than eat another pig rectum sandwich from McDonald's.