Nobody said "McDonalds," shut the hell up. 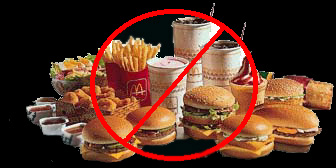 The other day, I accidentally heard the end of a McDonalds commercial on the radio. The commercial ended with the now-familiar phrase, "Did somebody say McDonalds?" I had no idea they were still pushing this campaign. WHY? It's not clever, it's not catchy, and it doesn't make sense!!! What more, McDonalds continues to be number one! What's wrong with you people? THE FOOD IS HORRIBLE, STOP EATING THERE.

What the hell is the message? Are they asking me a question? Do they want an answer? What's the point? The worst thing about the commercials are the guys they find to actually say the phrases. Where do they dig up these sick bastards?! When I heard the phrase "Did somebody say McDonalds," it sounded like it was coming from a pale, sickly pervert, penetrating my mind and molesting my brain.

When I heard it the other day, it was the first time in weeks. I had no idea how tricky those bastards at McDonalds are. They use a voice that sounds like your conscience talking to you.. a truly unsettling feeling. Man, I hate McDonalds.

I can't believe they're so big! Who eats that crap?? I mean, seriously, the food is barely a notch above eating dirt. The burgers (I use that word loosely here), consist of soggy buns, wilted lettuce, pink mystery sauce, and a half-assed excuse for a patty. The last burger I had from McDonalds had the consistency of pig snot and tasted as good. THE FOOD IS HORRIBLE. BOYCOTT MCDONALDS.

324,511 people have been brainwashed by McDonalds' shitty ad campaign.