How is it possible that a guy with a small penis and a hairy
back is more powerful than Pepsi on the Internet?

A millionaire emailed me the other day just to tell me that I'm always going to be a slave to the "upper class." It's nice of millionaires to take time away from sipping their fancy Château Petrus and gallivanting about in their tragically common yet fashionably-hip Mini Coopers to drop by the slums every now and then just to remind us that we're never going to "make it." To quote his email:

"...you still drive a middle class car, and I am sure your parents are withering away in a mud hut in central Missouri..."

Oooh you're a millionaire. Guess what yacht boy? 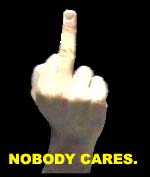 So I pose a question to millionaires everywhere: how does it feel to know that there are people out there who will never be as rich as you, but don't respect you anyway? I get more traffic than Burger King, Papa Johns, Pepsi and Domino's--huge corporations spend millions on promoting and advertising their meticulously engineered image every year, yet some middle class guy with a small dick and a hairy back commands more power on the Internet than they do. What are millionaires doing reading a site made by a pauper in the first place? Shouldn't you be trying to figure out how to cut costs by getting rid of water coolers and using one-ply toilet paper?

These corporate sites have promotions, games, and discounts, yet more people come to this site every day and read stupid bullshit about how big my balls are. On top of that, I've spent a grand total of $0.00 promoting my site. McDonald's corporation spent about $1.2 million on Internet promotions last year, so you'd think that of the "millions served daily," a few of them would log on every now and then and check their site just out of curiosity, if only to see nutritional (or lack of nutritional) information. So you'd think:

Isn't that a bitch? Do you have any idea how great it feels to command more power than millionaires when you're "just middle class?" Try buying that with your money. How does it feel to know that all your wealth can't buy one second of respect from anyone? People are saturated with your bullshit ads, and we're tired of buying your crap. The clock is ticking, fat-boy. We've had enough of your shitty wages, your shitty service, and your shitty attitude.

I guess you'll have to be content spending your money on $150 imported baskets and fancy sweaters so all your yacht club buddies can congratulate you for being an upper class snobby twat. Hey, at least you can always take solace in the fact that people are your friends for who you are and not your money, right?