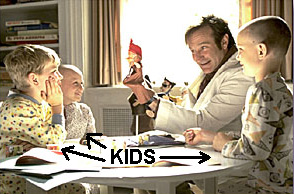 I had the misfortune of seeing Patch Adams the other day. It's a movie about some guy that ignores all the rules and conventions of being a doctor, and gets his girlfriend killed because of it. The movie started out in an insane asylum where Patch commits himself to because he's a crazed serial killer (they forgot to mention that part in the movie). On his first night there, he makes some guy take a leak at gun point, then he decides to be a doctor.

Nothing interesting happened for two years, then he decided to go to medical school. Instead of studying hard like all the other students, he smoked pot and looked at pictures of naked men. On the first day of class, Patch was lectured by the senior medical professor. The professor is the hero of the movie, keeping patch in line when he started to spew mushy bullshit about saving people and helping others. I thought the movie didn't suck as much ass as most others, when suddenly there were kids.

The worst part of the movie were the kids, and that stupid hag that sat behind me and cried during the WHOLE DAMN MOVIE. I HATE HER. Patch loves kids. I hate Patch. The picture at the top of this page shows Patch surrounded by those little shits. Always lauging and giggling. Oh.. you kids like laughing. Poor babies.. terminally ill. Well I've got news for you: nobody cares. The world has enough sick people who can't get better. Healthy people are the wave of the future. Why can't they just get better? Sick people get all the attention and care. What the hell is wrong with the world when only the sick get taken care of, while the rest of us get stepped on and forgotten. I say screw the sick people, and give us the medicine. I'm not sick, but I'll be damned if I'm going to give up my share of medicine to someone who is. That's bullshit. Nobody cares if they need it more. Give it to me. I deserve it, not them. They're a lost cause.

176,952 people have been murdered because of Patch Adams.