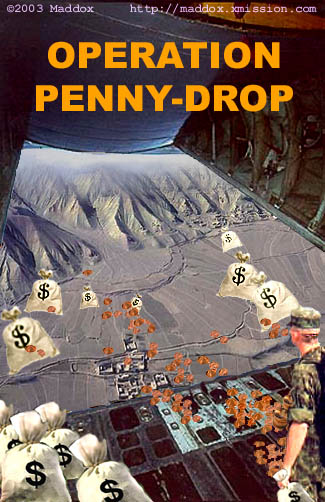 I was wandering around aimlessly at work the other day when I saw a group of co-workers watching a video of some war footage in Afghanistan. It was a good opportunity to be unproductive, so naturally I stood there and watched. The video was in black and white, and was shot from the point of view of the gunship as it fired explosive rounds at people. There was a little cross hair on the screen, and you could hear chatter of the pilot as he dropped the bombs.

Every time the pilot clicked the trigger button, it resulted in an explosion a few seconds later. They were literally firing thousands of rounds per minute, easily using hundreds of thousands of dollars in ammunition on people; not tanks, not turrets, not even jeeps, but people. So this gave me an idea: rather than using $100,000 worth of ammo, why don't we take $100,000, convert it to pennies, then drop the pennies on people instead? You could get 10 million pennies for $100,000, which should be able to fill at least 40 bags full of pennies. Thus we could drop bags of pennies more frequently than bombs, which could mean big savings for our military. Hell, you don't even have to drop them in bags to kill people. You could tape the pennies together 10 at a time and drop them from a height of 5,000 feet and kill damn near everything on the ground (and in a war on terrorism™, this is exactly what you'd want to do). 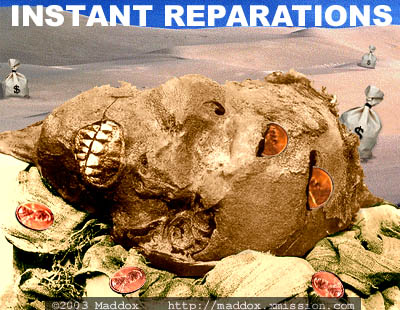 I call it: operation penny-drop. It's the perfect way to win a war. Even the hippies won't be bitching because after the war is over and we've killed all the terrorists, the people who are still alive can rebuild their country by picking the pennies from the skulls of the dead people. Not only will we have won the war, but we don't even have to worry about paying war reparations. It's the perfect plan because everybody wins. We kill all the evil terrorists, and give them some of our own currency to rebuild their country with. Eventually when we open the first Starbucks in their country, we won't even have to worry about currency exchange because they can use the left-over money to buy beverages, and let's face it, who could resist an ice cold frappuccino after a long war?

The military probably won't consider this idea because it's too good. Realistically, the military will probably continue to drop traditional bombs. However, it's a well-known fact that a percentage of bombs we drop every year won't detonate. When we're talking about bombs that cost over $100,000, that could add up quickly, so what can we do in case the bombs don't go off? Simple: strap bombs to the back of german shepherds:

The idea is that if the bomb doesn't go off, and the german shepherd's back doesn't break, then the enemy would be in for a nasty surprise when they'd try to retrieve our weapons. Sure a few dogs would die as collateral damage, but it would totally be worth it to see the expression on the terrorist's face when they get attacked by our german shepherds. The CIA could capture this with spy satellites and put together a "Terrorist Bloopers" video, which could mean more money for our military. I can't believe nobody thought of this idea until now.