Nobody cares if your puns were intended.
People who point out their puns are like comedians who explain their jokes: they both think you're too stupid to get it. The only good thing about the phrase "pun intended" is that it saves you time when you want to say "hello, I'm going to be at the bag convention this weekend, please be sure to stop by and say 'hi.' I'll be at the douche exhibit." Here's the deal: when you point out your puns, you're making a value judgement on me, the reader. You're saying:

Hey reader, you see that play on words I just made? Yeah, well that wasn't an accident. In fact, I thought it was so clever that I didn't think your simple mind would be able to comprehend the brilliance of my play on words, and I wanted to make sure you know that I'm not only smart enough to use homonyms, but that I'm smart enough to point them out.

The sheer level of narcissism it takes to think that anyone gives a shit about whether or not you meant to write your pun is mind boggling. If narcissism were measured in units of mass, the skulls of people who pointed out puns would crush in on themselves in a giant black hole of stupidity.

The other variation of calling attention to a pun is the pun denial, or "no pun intended," which is a less formal way of saying:

Please direct your attention towards my pun. Admittedly I do think it's clever, but I think that you think so highly of me, that I want you to know that I would never resort to using such a commonplace literary device in my prose. Therefore, I would like to formally renounce my attempt at humor and assure you that I am above making puns as a writer, as a pupil of language, and as citizen of Earth.

The phrase "no pun intended" makes me want to band saw my dick off just in case I'm the last man alive and I have to risk repopulating Earth with some moron's incapable vagina. There's no such thing as an unintentional pun; the act of typing the phrase "no pun intended" makes it intentional. If your pun truly wasn't intended, then why didn't you erase it and write something else, asshole?

I read an exchange the other day between some loser flirting with some lonely single mom on a message board for lonely single losers (not to preclude one from the other, no reason you can't be both). The guy's avatar said "IRISH 4 LIFE," and his profile stated that he's a "Dave Matthews Band" fan, so already his face is high on my list of places I would like to rest my feet (Dave Matthews fans are like the trans-fats of fandom: oversaturated with obnoxiousness, found everywhere, and impossible to get rid of; for example, they only refer to the band as DMB... you can't abbreviate the word 'band' assholes, it's a band by virtue of the fact that there is more than 1 person in it, and for the record, adding the word 'band' to your name doesn't make you any less of an egotistical shit head). Man, you know what I hate? Dave Matthews. 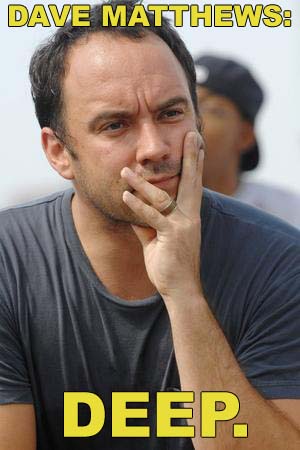 It's the whitest band ever, which is saying something considering 3 of the members are black, and Dave Matthews is literally an African American (born in South Africa). His music can be heard in Whole Foods stores, Live Earth concerts, or blasting from the speakers of open-topped Jeeps parked on curbs everywhere. The typical fan is either some dude wearing khaki cargo shorts replete with dangling rock climbing hooks, even though he doesn't hike because he can't afford to drive his gas-guzzling Jeep, or some chick with huge boobs, buck teeth, and an ankle-length floral skirt that she twirls around like an idiot because she thinks her awesome boobs give her enough social capital to make up for the buck teeth and hairy toes (they don't): 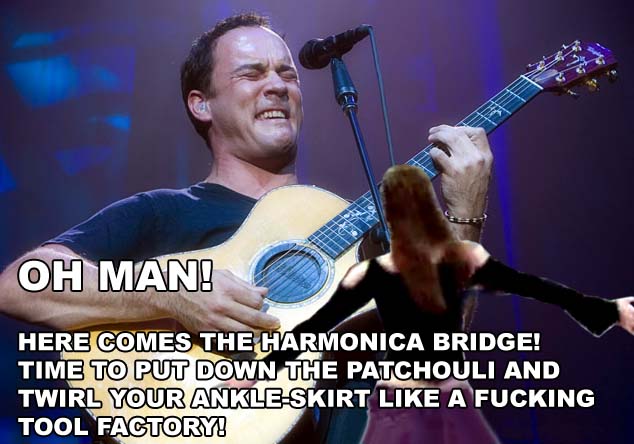 So anyway, I signed up for an account so I could send this guy hate mail for being a "DMB" fan since that was enough, but what I read next made me so mad that I headbutt myself in the face.

He was trying so hard to impress this chick, that he made a pun and followed it with "(and yes, pun intended!!)" So not only did he point out his pun, but he took it a step further and answered an imaginary rhetorical question that nobody was asking. Here's how the conversation played out in his head:

IRISH4LIFE: "Fighting global warming is cool." Hmm, I wonder if people will get the subtle association between the word "cool" and the concept of "global warming," since global warming has to do with heat, and the word cool has to do with cultural attitudes and perceptions as well as how chill something is. Holy shit, another pun! I'm on fire! HOLY SHIT! Three puns in a row?! I'm so getting laid. But what if she reads it and doesn't get it? I can picture her in my head:

Lonely mom: "Wait! Did you intentionally--"

IRISH4LIFE: I'd better cut her off mid-sentence while she's thinking by adding the parenthetical: "(yes! yes, that was intentional)." You've still got it, Irish.

Ho ho ho! Laugh it up, dickwad. People who point out their puns should be put to sleep (gassed).