Queen of the Damned is the worst movie ever made. EVER. 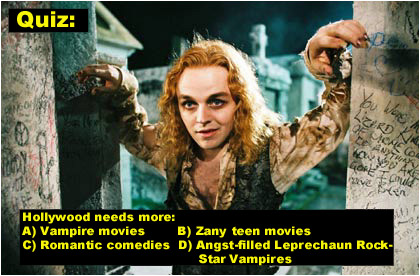 If you answered the above quiz, you're wrong. I'm not proud of it, but I haven't seen a movie this poor since Red Planet, which is saying a lot since I'd rather have my face bounced off of a telephone pole than having to see that again. First of all, this is not really a movie so much as a bullshit MTV propaganda machine.

I'm just going to come out and say it: I hate Vampire movies. All of them. Short of making a movie about a vampire lawyer, or an emergency room drama starring a vampire, every possible combination of vampire and profession has been done. I don't know if any directors will ever read this, but the whole techno neo-gothic dance club vampire thing has to go. PLEASE. I know it's the hip thing to make your character a vampire that goes to raver clubs, but it's not as cool as it seems, trust me. Nobody wants to see some skinny, pale white kid dancing to shitty techno in a "vampire club." Oooh, how original. Even if it was original, which it's not, it's a shitty idea. That's what this whole movie is about: lame dancing cyber techno vampires. Somebody shoot me. Or better yet, shoot anyone who liked this movie.

This movie starts out with a vampire rising from his grave because he hears his "kind of music." Apparently 16'th century feudal lords are into shitty modern alternative trash. Within the first five minutes of the movie, he joins a rock band and they literally play a music video during the credits. At this point I was looking for a hot iron to gouge my eyes out with. I don't know how they could have placed the music videos into the movie more shamelessly. I can just imagine the producer sitting around a table saying:
"Hmm... our record sales have been down the last couple of months.. what can we do to boost our sales? Can't we just use our media monopoly and make a movie about a Rock Star?"
"Sir, we already did that last month.. the movie was called Rock Star."
"I know! We'll make a movie about a VAMPIRE Rock Star!!!"


At one point in the movie the director gets all of his buddies on screen as extras. One of the vampires had a huge gut and bologna tits. It doesn't get any cooler than flabby vampires with saggy tits. Morons. Long story short, the only reason I stayed until the end was to see if they made a dedication to Aaliyah in the movie, but then I realized that it would have been more respectful if they just denied the movie ever existed.