Quantum of Solace is a shitpile.
If you don't have time to read this entire review, here's all you need to know about Quantum of Solace: the second-in-command to the super villain is named Elvis, and is played by this guy: 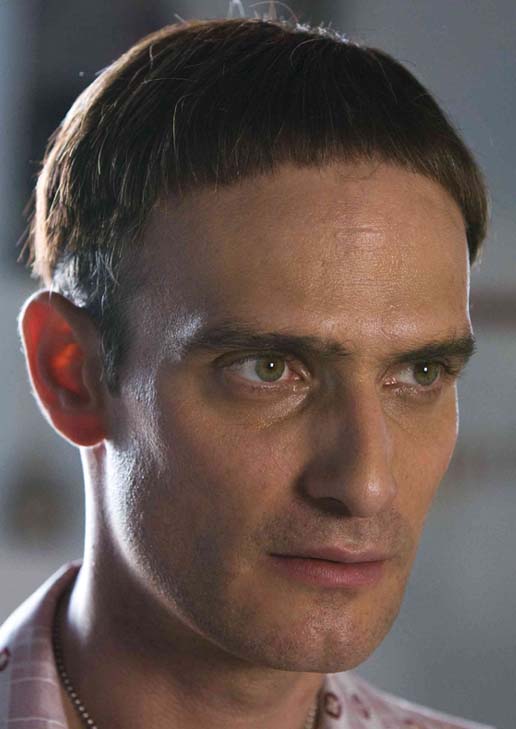 This summer, terror has a new name: Elvis.

Imagine finding out you got rejected from community college, then finding out that your alcoholic father got arrested for domestic abuse, you lost all your life savings in a Ponzi scheme, and all of this happens to you while you're on the space shuttle Challenger. Then you wake up and it's all a bad dream, except you realize that you're at work without clothes on, and work is NASA and you're really on the space shuttle Challenger. That's what this movie is like, only infinitely worse. Everything about this movie pissed me off, save for the lesbian finger bang scene. Except even that sucked because it wasn't in the movie.

Only James Bond—the secret agent who foiled a plot to destroy London with nuclear missiles—can make water more affordable for Bolivians! This is easily the stupidest James Bond movie since the last one. I don't know what Hollywood's obsession is with making jerk-off movies where the bad guys are "realistic." You know what's another word for realistic? Boring. If I wanted realism, I'd walk down the street to get Mexican food, and maybe stop by a Borders and pick up some magazines. You know why they don't make movies about me shopping for magazines? That's because nobody gives a shit. And that's what Quantum of Solace is: me shopping for magazines, with no Mexican food. I don't see movies for realism, and if I did, I sure as hell wouldn't watch one made by some asshole who thinks "reality" can best be represented with the aid of 219 special effects artists. Which leads me to this movie's biggest problem:

Marc Forster is an idiot.

If Marc Forster was an X-man, his super power would be ruining brands. Question: what's the difference between Oscar winning director Marc Forster, and a first-year film-school student? Nothing apparently, because his movie is wrought with compromise and stupid film-school gimmicks. There was a scene in the movie shot in Siena where Forster agreed to conditions which forbade him from using helicopter shots or showing any violence "involving people or animals." That's why when a gunshot was fired into a crowd of thousands of people, you don't see a single limb explode. Emphasis on you and not me because I imagined a scene where the bullet not only kills people, but is sentient and kills every single person in the stadium, starting with grandmas and horses, then when the last person is killed, the bullet turns into a hot alien babe who then proceeds to make love to my junk, orally. Except my wiener is really a shotgun, and I blow her head off. Too bad, hottie!

As for the film-school gimmicks, Forster cram-packed this movie with symbolism. There's a scene where some chick gets inexplicably drowned in oil, and it's supposed to parallel an iconic scene from Goldfinger. There's another scene in an opera house that "pays homage" to the Hitchcock movie The Man Who Knew Too Much, and a planefight that pays homage to yet another Hitchcock movie, North by Northwest. Then Forster made all the action sequences in the movie revolve around earth, water, air and fire. HOLY SHIT WE GET IT, YOU LIKE TO USE SYMBOLISM IN YOUR MOVIES:

Everyone always thinks that directors are super smart if they use symbolism, like somehow conveying something visually gives the movie some validity it wouldn't have had if the same message was conveyed through dialogue alone. But nobody ever asks: why? Why do pretentious artsy dipshits think symbolism is the holy grail of filmmaking? And yes, I know Forster was trying to say that oil is more precious than gold (it's not), and even if it was, that message has nothing to do with the movie because THIS MOVIE IS ABOUT WATER. Does anyone other than James Bond nerds care that some chick was arbitrarily made to look like some other chick from an old movie? If you took the symbolism out of the movie, would it make any difference? That's a rhetorical question, and the answer is my fist. Nobody cares about artsy gimmicks. Focus on making the movie not suck instead, assholes.

Characters from foreign countries usually speak english in a foreign accent instead of their native tongue in movies, because subtitles don't sit well with audiences. It's sort of a cop out, but not a big deal because there's an unspoken agreement between audiences and directors that states: "we, the audience, don't want to read and in return, we promise not to make a big fuss about you dumbing down society and culture."

Well Marc Forster has done the seemingly impossible, and found an analogue to "english with an accent," only visually. Every time there's a location change in the movie, the name of the country flashes up on the screen, but instead of using plain type, Forster uses a different font for every country. So when there's a scene in Russia, they use a font that looks kind of Russian, but is still in english.

Not only is it unnecessary and condescending, but it shows just how much contempt Forster has for his audience. Hey Forster, you know why we don't need ethnic-looking fonts to illustrate the fact that we're in another country? Because letters placed in close proximity to each other spell words that represent the names of those countries. That, and the obvious change in scenery. Where's your artsy visual symbolism now, asshole? I mean, this is some Windows movie maker shit. Even my mom who's a total /b/tard and sucks at non-linear editing knows that using fancy fonts makes her a lameass.

The decision to set this movie in Bolivia was puzzling, because based on my knowledge of the geopolitical influence of Latin American countries, I posit the following: Bolivia doesn't matter.

In fact, none of the scenes in the movie were even shot in Bolivia (shot in Chile instead). But what makes this plot industrial-strength stupid is that it's based on a true story. Only they forgot to tell you that. What's it called when you borrow a story without giving credit? Oh yeah, theft. But to be fair, they did change the story by making it duller:

In 1999, Bechtel corporation signed a contract with the president of Bolivia to privatize the water supply in the 3rd-largest city, and shortly thereafter tripled the water rates (source - new window). Yeah, that's right, they tripled the rates in real life... so when the bad guy in James Bond threatens to double the rates, it's like the producers are challenging you to give less of a shit. They took a non-interesting real-life story and somehow made it less interesting than real life.

And finally, no review of Quantum of Solace can be complete without talking about how extraordinarily stupid the title is. I know people all over the world jumped all over it as soon as it was announced, but I don't think anyone truly realizes how literally the title is meant to be taken. So don't email crying about how I'm not the first person to point this out, because I am, and frankly I'm writing this as a gesture of charity by sharing my genius with the world, so shut your fat mouth.

Here's what each word of the subtitle means:

1. A discrete amount of something that is analogous to the quantities in quantum theory.

1. The comfort you feel when consoled in times of sadness or misery.

So the title literally translates to "James Bond: A discrete amount of comfort felt when consoled during a time of sadness." In the final scene of the movie, James Bond finally catches some dude he was chasing for revenge, and then Bond (Daniel Craig) shows off his acting chops by showing the tiniest glimmer of a smirk, an almost infinitesimally small, but measurable amount of consolation. It's hard to describe how incomprehensibly stupid this scene was with mere words, so here's what it looked like: 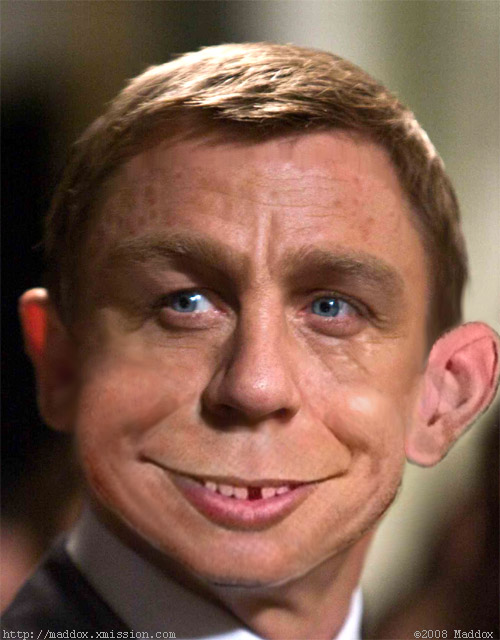 A literal quantum of solace.

Man, this review is like 10 pages long already and I haven't even started talking about the stupid boat scene (basically there's a 2-hour long boat scene where Bond gets chased by 3 boats, and it ends when Bond just decides to drive off), or how Bond spies on the super villain by driving his motorcycle up to a chainlink fence on a sunny afternoon and just listens to them talk. Quantum of Solace is a shit pastry. Avoid: