Don't Let Them Screw You. 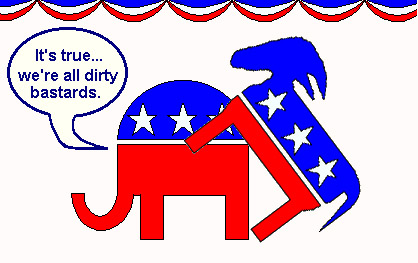 To be a politician is to be a master of the art of bullshit. Both Republicans and Democrats have their heads up their asses. If I was in office, things would be different. First of all, I'd get rid of all formal traditions (read: ass kissing) during meetings. Nobody wants to hear some fat bastard kissing everyone's ass for an hour or two. Let's cut the bullshit and get to the point. Voting would take place quickly and often. Example: "Who votes Ellen Degeneris is a stupid piece of shit?" Everyone raises their hand, and it's over. Non of this "yay" and "nay" bullshit they have now.

Also, no more bald, ugly people with goofy-ass smiles are allowed in office. I'm sick of politicians that look like child molestors. What the hell? Are we paying these guys to make laws or to sit there and be ugly? Please.

Disputes that last over ten minutes shall be settled by catapult. Both parties in the debate will strapped to a catapult and launched down a mountain. Whichever party survives, if any, will be declared the winner of the argument. Anyone that objects to this rule will also be subject to catapult.

No vegetarians are allowed in congress. They obviously don't know what's good for them, so we don't want them making decisions for anyone.

Everyone will address me as "Supreme king ruler of the house, who I am indebted to for the privilege of existence."

Everyone will compliment me on my manly physique and muscular man-boobs.

255,837 republicans and democrats want this page down.