How to render the Segway Human Transporter obsolete:

Every once in a while someone invents something so simple and elegant that it makes you say "damn, why didn't I think of that?" Then there are the other inventions, the ones that make you say "man, I know exactly why I didn't think of that: that's the dumbest thing I've ever seen." Introducing Segway, transporter of humans. Of all the places you'll inevitably be transported to, the first place will be the bank because the Segway will cost you one healthy kidney, $4,500, and a pint of virgin blood.

The reason for this cost: superfluous bullshit like high-voltage field-effect transistors or FETs. What the hell does a FET do? Nobody knows, but I guarantee some nerd spent months writing a graduate thesis on why it's important (and failing). The Segway is packed full of useless, but important-sounding extras like "angular-rate sensors" (or "gyroscopes" to anyone with something better to do than to look up obfuscated $6 words to describe a spinning wheel), and two digital signal processor controller boards with enough processing power to give even the beefiest desktop PC penis envy.

The controller boards monitor the system 100 times per second for conditions that require a response, adjusting the motors up to 20,000 times per second (give or take 19,000), making calculations based on information from five solid-state gyroscopes. You'd think all of this technology would be able to do something useful like cure cancer or make an episode of "Will and Grace" funny, but alas, all it does is balance a pole.

Much like the introduction to an IMAX film, the Segway engineers boast about the inherent inefficiencies of their "innovation:" redundant sensors, microprocessors, and controller boards that cost a fortune, and all for what? A balancing act? Well I came up with an innovation of my own that will help balance a Segway without years of research and millions of dollars invested in obscure technology. The secret? 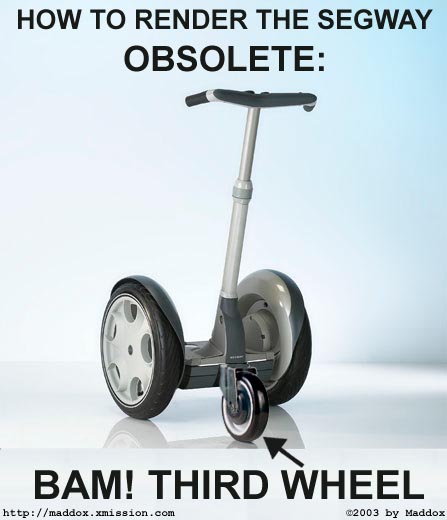 Yes, that's right, what many people don't realize is that you can be just as space efficient and stable with a third wheel. Hell, it doesn't even need to be turned on to balance itself. Amazing! In fact, the only thing this revolutionary new model requires from the old Segway are the motors, gear box, wheels and batteries. Throw the rest of that shit away. What's the point of all this technology if it costs a fortune? Here's a bonus: add shock absorbers to the front wheel to compensate for tilt. Man someone should hire me full time just to ruin other people's inventions.

I must admit though, the Segway is quite revolutionary. So revolutionary in fact, that it takes nothing less than a programmer and a few days to build one from scratch for less than half the cost. The Segway has been thoroughly owned.