Wouldn't it be great if we could
answer people with a kick to the crotch? 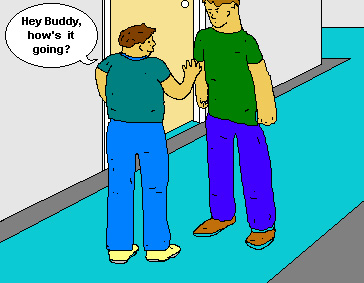 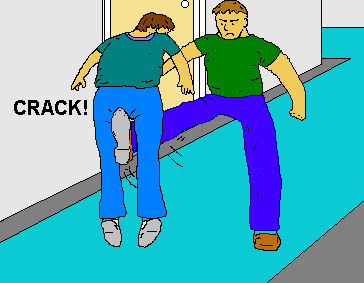 Every day I'm bombarded with questions from people I don't know.

"Are you having a good day today?"

I'm tired of being interrogated by strangers. Why don't they leave me the hell alone? Nobody cares how my day is going, really. If they did, they'd follow up with more than a contrived giggle or a half-assed shrug. I hate the question "how's it going?" How's what going? My day? Shitty. I keep getting harassed by people asking me "how's it going?" Another question that bugs me is "What are you doing?" I could be sitting down at a desk, and it doesn't matter how obvious it is that I'm busy, I still get asked. What the hell does it look like I'm doing? What do they expect me to say?

"Oh, I was just sitting here with my thumb up my ass, waiting for you to ask me what I was doing. In fact, let's just stand here and piss away 3 minutes of our lives talking in unclear ambiguous terms about how our day is, what we did five minutes ago, and what we plan on doing five minutes from now."

I'm not a poor sport. If people want to play mind games with me, then I'm willing to play. Sometimes I'll ask people how it's going, just to see if they have a unique response. So far, I've heard good, great and pretty good. Doesn't anyone tell the truth any more?? Every single one of them: liars . They think they can fool me with their smug grin? They can't. I know better. I know that they're all depressed and miserable.

Regardless, I have to give them credit. They know that they're all going to die some day. So I don't know why everyone's always so happy all the time. Why don't they stop trying to fool themselves and admit that they're having a shitty day, and every other day has been shitty, and every day in the foreseeable future WILL BE SHITTY. Every day is shitty, and there's nothing you can do about it. Even if they do admit that their day is shitty, nobody will care. That's because nobody ever cares. They're all greedy bastards, out to kick you in the crotch the second you blink.

The next time you ask someone how their day is going, expect, no, DEMAND a response. Don't settle for good. Demand the truth. Make them admit that they're having a shitty day, and then do your best to make it worse.