You may know Sony most readily as the company that recently recalled something on the order of every laptop battery ever made because of a small glitch (they explode). Then there was the "rootkit" debacle, where Sony secretly installed hidden bullshit on your computer. One of Sony BMG's presidents handled the situation with the delicacy of a gang rape with this quote: "Most people, I think, don't even know what a rootkit is, so why should they care about it?" Good point, shit-head! And before that, Sony was known for its shitty optical drives in their PS2s, resulting in a class action lawsuit. The word "shitty" in the previous sentence is a bit misleading, since I also use the word to describe Renée Zellweger's life, and having to void your warranty by adjusting a cog to fix a misaligned laser inside your PS2 is slightly shittier.

Not content with the reaming they give consumers with their shoddy products and condescending attitude, Sony determined that it didn't have enough bad press, so they decided to wield their giant gnarled cock of corporate greed again, this time training it on a small-time import shop called "Lik Sang." Lik Sang was a haven for nerds who wanted to import games and systems from other countries. It turns out that Lik Sang broke some major laws that not only earned them the scorn of Sony, but pissed Sony off to the point where they sued Lik Sang into oblivion. So what was this grave infraction committed against Sony that not only threatened the very foundation of this giant multi-national corporation, but warranted destroying the lives and careers of a group of dorks running a gaming website? Simple: they committed the mortal sin of selling Japanese PSPs to European gamers. Oh no! Not that!

When I read the law suit, I did a double take to make sure I read it correctly. Sony is suing to prevent people from selling PSPs? Great move, morons! Because if there's anything Sony needs right now, it's fewer people buying PSPs. In fact, PSP sales are part of the reason Sony expects to lose $1.7 billion dollars in their gaming division by March. That means that I and anyone else who makes any money at all between now and March (or at least manages not to lose more than $1,699,999,999.99) will officially make more money than Sony's gaming division. I rule.

This isn't the first time Sony bullied a gaming website for selling PSP imports. In June of 2005, Sony sued a website called ElectricBirdLand (Sony literally hired men in dark sunglasses to deliver the papers to the defendant, because Sony is insecure about the size of its penis), stating that the sale of Japanese PSPs to the UK could hurt their ability to exploit the "excitement and anticipation of the market." Hey Sony, you know what else could help you exploit the excitement and anticipation of the market? The PSP not sucking: 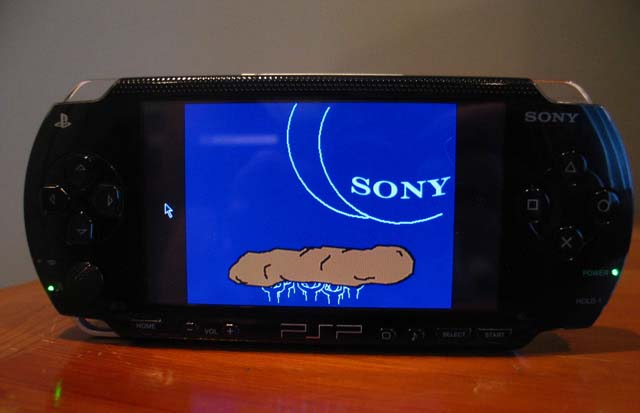 Sony's strategy towards portable gaming seems to be to take the same shitty first generation Playstation games that weren't great to begin with, and make them portable so now we can take an example of Sony's utter-inability-to-stop-sucking with us everywhere we go. Nobody wants to buy movies in your stupid proprietary format, assholes!


So why does a company that relies on consumer satisfaction and brand recognition treat its fans with such contempt? Because...

Sony would love nothing more than to see you and your family suffer. Sony is like that psycho-ex who you had a few good times with, but was too clingy and the sex got boring. Now it's over and Sony is still stewing about it by leaving you voice mail asking for another chance and promising it "can change."

Tough shit Sony. We've moved on. We're dating your younger, hotter sister, Wii. Even your fuglier step-sister, Xbox 360, looks hotter than you do. At least she's been around the block a few times and knows how to turn tricks. You've got nothing, and it's going to stay that way until you stop being a crabby old cunt.