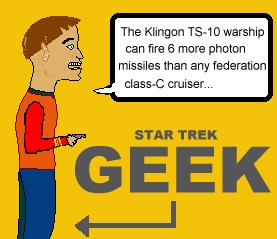 I don't consider myself a very violent person in real life, but if I ever met anyone that could speak Klingon, I would hit them. I admit that I've watched a few episodes of Star Trek: The Next Generation to cure my insomnia, but then I violently burned my eyes out with paint thinner when I realized what I had done.

I hate Star Trek geeks. Recently at work, I was cornered by a Star Trek geek that wouldn't leave me alone. Some guy comes up to me and starts Trek-babbling about about Bajorans and Cardassians and about how they were trying to take over the federation or some other such bullshit.

"Blah blah blah" the loser kept babbling until finally I said "I hate you. Leave me alone."
At this point, he saw that his tactics to annoy me weren't working any more, so he switched into Ultra-Geek mode. I was a little worried. I had to think quick. I looked around the room and saw a steel-tipped Jack Hammer. "It just might work," I said to myself.
I got up to go get it, but I was too late. He was geeking me to death with his William Shatner beam of shitty acting.

I was only a few feet away from the Jack Hammer, but I was paralyzed with nerd disease. Finally I grabbed the Jack Hammer and started to chisel a hole into his chest. He then used his secret weapon: quoting lines from the Physics of Star Trek book, but I persisted to chisel away at his chest. After I made a hole in his chest, I stomped his head in, but his acidic geek blood got all over my leg and I had to amputate my leg. True story.