If you've ever wanted to go to Asia, now is the time. Ticket prices are the lowest they've been in years because of the outbreak of Irresponsible Panic Bullshit Journalism, or IPBJ throughout the media, a disease that causes the media to compensate for a lack of real news by hyping up the threat of some random virus such as SARS. Once you get SARS you have a modest 91% chance of living, that is, if you can survive such grueling symptoms as "headache, fever," and "an overall feeling of discomfort, and body aches." Look out AIDS.

Oh no, anything but "an overall feeling of discomfort." If you're one of the few people who didn't buy into all the hype about SARS, consider traveling to Hong Kong or Thailand (now that their economies have nearly been devastated by chicken shits who don't realize that 11,000+ people die from the flu every year, about 13 times the rate of SARS). 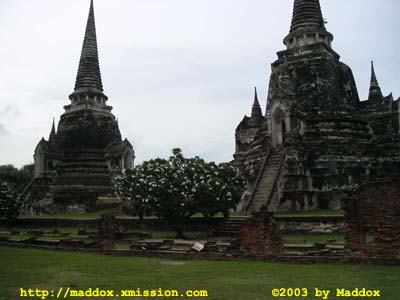 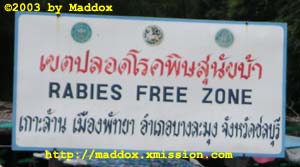 If you've never been to Thailand, you might have the misperception that the entire country is full of Thai hookers:

This couldn't be further from the truth. There are many places in Thailand that are completely free of hookers. For example, the ticket counter at the airport, and most of the airport parking lot were quite free of prostitutes. Warning: if you're an ugly, balding, British man, you can skip the following paragraph: 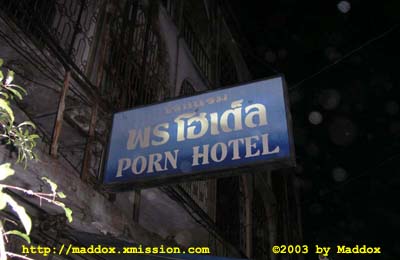 If you happen to swing by Pattay, be sure to check out the Tiffany show. You'll be hard-pressed to find chicks who look hotter than the models at Tiffany's, or you'll just be hard. The only problem is, they're all transvestites: 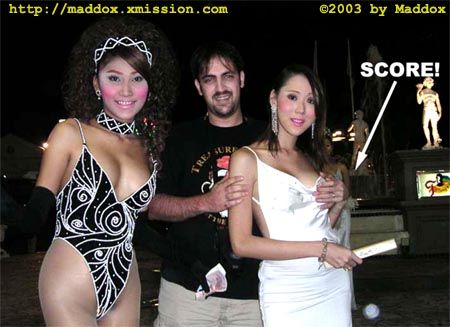 These chicks have bigger dicks than I do.

If you go shopping and you happen to come across one of these, simply replace the word "TOURIST" with "JACKASS." It's a card that certain shopping malls give out to dumb looking westerners, and me, so that you think you're getting a really good deal on everything you buy. You're getting a deal alright, it's just that this deal happens to be raw: 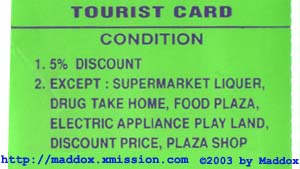 If you don't plan on buying anything good and you don't mind paying twice the cost, this card is perfect for you. Otherwise, be prepared to haggle the price of everything down at least 20%. I'm not sure if this applies to hookers, but it's better to play it safe so you get the most bang for your buck. 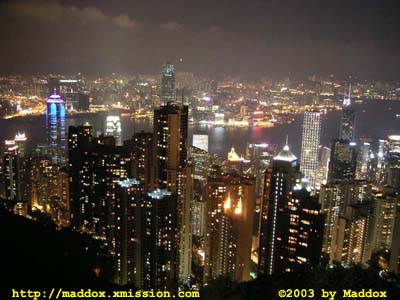 I don't even know why they bother having weather reports in Hong Kong, because every day is the same as the day before: TOO DAMN HOT. The second you step off the plane, it's like someone's blowing you in the face with a hair dryer, but eventually you'll get used to the holy-shit-my-balls-are-literally-sweating weather and it won't seem so bad.

The food in Hong Kong, as with Thailand is generally very good. Thai food from Hong Kong tastes almost as good as Thai food from Thailand and vice versa. You just have to be careful when you order beef balls that they're balls made of beef, not balls from a bull. Although the food is generally good, there are some questionable regional favorites: 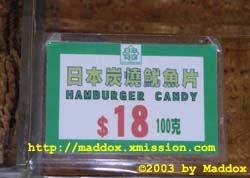 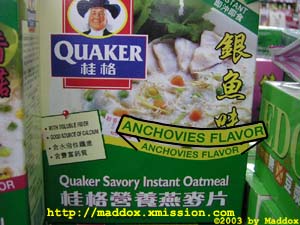 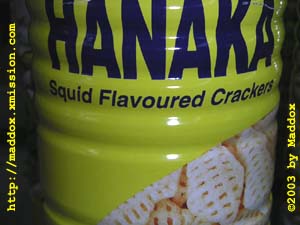 Other than the food, the best thing about Hong Kong is probably that there are 50-60 billion arcades on every street, almost as many donut shops as they have in Los Angeles.

Of course, the arcades in Hong Kong have no shortage of cheap bastards who keep picking Akuma every time in Street Fighter, just like the losers in the states.