THX and Fandango commercials are to movies... 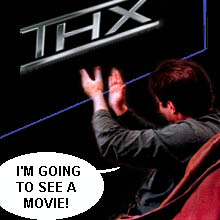 Chances are that of the thousands of people who will inevitably waste their time reading this page, at least one of them is a type of person who laughs at the Fandango.com commercial or the THX intro during movie previews. The Fandango.com commercial is the one where a guy shows up at a theater and can't buy tickets because they're sold out; he then notices some guy who ordered his tickets off of "fandango" and tries to trick the ticket counter into giving him tickets. Hilarity ensues.

Look, I know there are a lot of people out there who find this commercial funny. I'm here to tell you that it's not. Trust me, it's a stupid commercial and anyone who laughed during it is plain old vanilla flavored stupid. It doesn't get any simpler than that. And I know that some of you who laughed at this commercial also think that I'm not talking about you. Again, I want to make it clear that I am.

Then there are the loud obnoxious boring THX intros. The one which stands out most in my mind (because of all the idiots laughing around me), is the one where a stupid robot with a stupid jet pack tries to fix the stupid logo. This commercial is stupid. I had to write out that last sentence explicitly for those of you who actually laughed at this intro because you're morons and probably couldn't infer this otherwise. Why do people laugh at this intro? Who cares? Yes, we know George Lucas invented THX, and we know that they think it's revolutionary. My question is: why do we have to be reminded of their stupid sound process EVERY TIME WE GO TO SEE A MOVIE? Does the inventor of the modern film projector come on and waste our time with a stupid intro reminding us how magnificent he is every time we see a movie?

I have an idea to help solve this problem:

1. Find someone who laughs at the THX commercials.
2. Punch him.

It's almost as if they make these commercials as obnoxious as possible on purpose. Isn't it ironic that the only time the intro isn't filled with a blaring crescendo of vacuum cleaner noise is near the end when it becomes completely silent and the message "the audience is listening" is displayed? That's weird, because I could have sworn that I was reading and no longer listening, being as all the noise has stopped. Maybe someone should tell the sound engineers that "the audience isn't listening" at the end of the intro because there's NOTHING TO LISTEN TO. Even if there was, what kind of catch phrase is that anyway? What is it supposed to mean? Who are they talking to? By saying "the audience," it implies that they're talking to someone NOT IN the audience, in which case the phrase would make sense. But since they are displaying the message to us, the audience, then shouldn't the phrase read "you're listening"? And if so, is it necessary to point out that fact to us, being as it is assumed that we are not deaf if we are going to see a movie in a theater. And if we are, then what's the point?

136,629 assholes laughed at the Fandango and THX intros when they saw them.