I'm noticing that the big trend in the auto industry lately has been to go bankrupt by making cars that look as shitty as possible. I don't get it, things were going fine and then all of a sudden everyone starts coming out with these giant stupid plastic looking turds on wheels. I thought that nobody would buy them, but a mere glance down the streets killed my theory and proved once and for all that rich people must buy shitty cars because they lack class (at least while the cars are still new so they can grab a piece of that sweet packaged individuality). So I've collected four of the ugliest and rated them for your convenience.

For my ratings, I'll be using the "Gary Busey scale of ugliness," where a rating of 0 means least ugly, and a rating of Gary Busey means obnoxiously ugly.

For example, CNN's news anchor Rudi Bakhtiar would get a rating of 0 because she's super fine and a mere glance would result in nothing short of a medium-sized boner and a violent tossing session (despite the fact that she can't pronounce "Saddam"). So then, onto the cars: 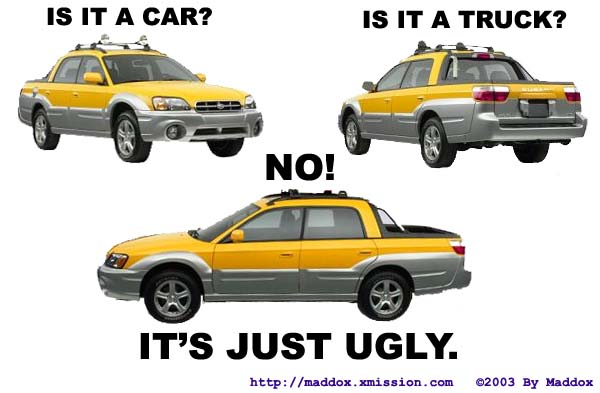 This is easily one of the dumbest looking cars I've seen in years. It's a car with an identity crisis: it can't decide whether it wants to be a car or a truck, so it tries to be both and the result is a goofy looking cross between the back end of a Datsun pickup truck and the front half of one of those dog shit $5 canvas sneakers from Walmart:

Then, as if they haven't given your eyes enough of a beast raping, they tack on two tons of ugly plastic trim on the side and paint it shiny so people will know that your dumb ass is coming from miles away. I'm trying hard to come up with something good to say about this car, but I just can't. Actually, that was a lie. I wasn't trying to say anything good about the car because I hate everything about it and anyone stupid enough to buy one. 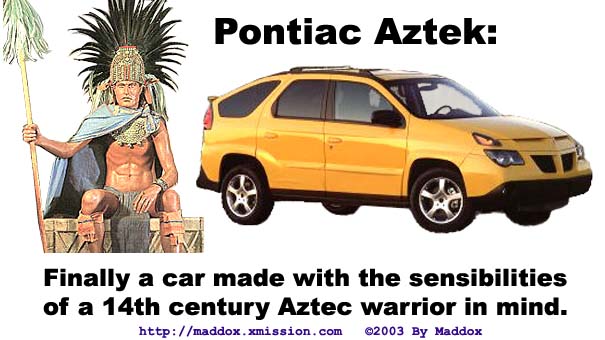 With this car, Pontiac has set out to finish what Cortez started by pilfering the Aztecs of their last remaining treasure: their name. Except Pontiac spelled it with a "k" because spelling words inkorrectly is totally kool TO THE MAX.

I can just imagine the designers brainstorming, when suddenly the bosses son came up with this cock barf: "hey, let's make the back end of the car look like a deformed rhombus, and while we're at it, let's smash two cars on top of each other for the front half and call it a day!" The double grill disaster they have going on in the front sets a new benchmark for stupid grills (a title previously held by the Cadillac Escalade).

The end result is a car that Montezuma himself would be proud to drive, had his entire civilization not been savagely murdered by blood sucking Spanish conquistadors. Then again, even people from the 14th century probably had better taste than the putzes who buy cars today. I was going to rate this car lower, but my opinion is biased because of my contempt for Cortez. 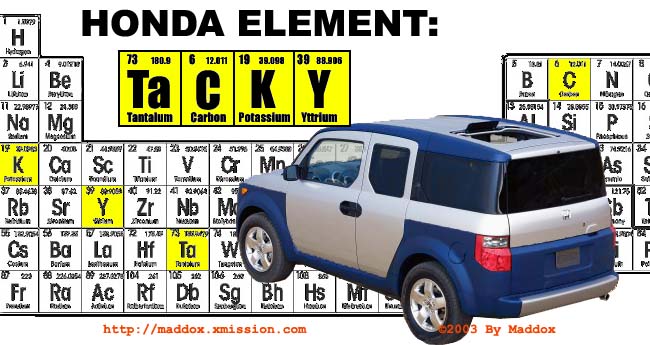 Style is the element lacking most in this cubist atrocity. Everything about this car screams "tacky." This car just looks terrible; it looks like it was designed by a blind child with arthritis. In a coma. Whoever chose the color scheme for this car was probably asked to do so at gun point, because I don't think it's possible to choose two uglier colors.

This is coming from a guy who has the color-coordination skills of Stevie Wonder, if that tells you anything (I'm straight).

I have to give Honda credit though: at least they chose a name dumb enough to suit the car. What kind of name is "Element"? What next, the Honda Isotope? Fortunately, this is one Element you won't find on the periodic table. I wanted to rate this one higher, but it's nice to see big companies like Honda giving blind designers a chance. 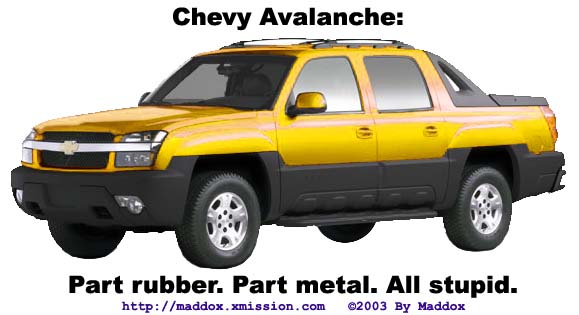 Nothing says versatile like a truck made out of rubber. Chevy decided to subscribe to the "tack as much shit on the sides as you can" school of thought, throwing two or three tons of trim on the sides like the Subaru Baja.

It almost looks like a Transformer, but since Transformers are badass (except for when the creators were temporarily abducted by aliens and a shitty-cartoon chip was implanted in their brains that caused them to make the short lived "Beast Wars" series), it was hard for me to find a Transformer lame enough to do the Avalanche justice. Alas, the first one who came to mind is the one I eventually went with: 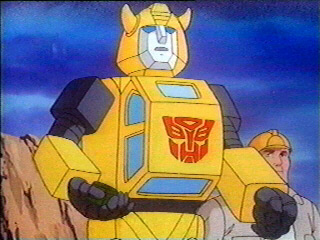 Bumblebee: what a dumbass.

Bumblebee's sole purpose in the show was to run around and shove his fist up people's asses while their backs were turned. Maybe that wasn't his goal verbatim, but the fact remains: nobody knew what Bumblebee's real purpose was other than getting in the way of the most badass Transformer ever (next to Unicron): Star Scream.

Oh yeah, about the Avalanche: it's a piece of shit, and the type of people who would drive it are the same type of people who spend their Saturday nights changing their corn pads while listening to country music, which also happens to suck rhinoceros cock, but not as much as the Chevy Avalanche.

That about does it, I hope this guide helps you avoid buying a shitty car. If not, go to hell.

2,588,710 people bought one or more of these cars not realizing what suckers they are.